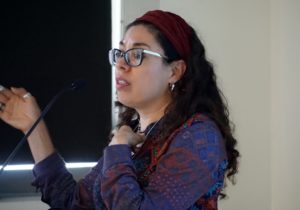 Carmen Pedroza, winner of the first Rosemary Firth Prize for Best Paper on the Economics of Gender in Fisheries and Aquaculture, presents at IIFET-2018. Photo: Ann Shriver

Building on efforts to highlight gender research at previous IIFET Conferences, the Rosemary First Best Paper Prize prize aims to help bring gender study into economic and trade research themes in a rigorous manner by promoting research that is quantitative and based on both sound economic and gender methodologies. The prize consists of a $500 check, a stipend to cover airfare and lodging and conference registration. This takes over from the previous Rosemary Firth Prize for Best Presentation awarded at IIFET 2016 in Aberdeen. 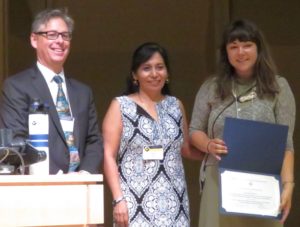 In Seattle, the winner of the Rosemary Firth Prize for Best Paper was Carmen Pedroza-Gutiérrez [Universidad Nacional Autónoma de México] for her paper, “The Gender Division of Labor in Fish Processing in Lake Chapala: A Source of  Bargaining Power.” This paper addressed the bargaining power and factors involved in the division of labor in fish processing in three locations, two dominated by women and one by men, taking into account the historical conditions, social, and economic opportunities, and power relations at each site. fish-processing as a labor market opportunity for women is a source of bargaining power, is flexible in working hours, and a constant and reliable source of income, unlike fishing. In Petatán, fish-processing is a women dominated activity, highly valued, with the largest average income, and complementary to other household income. In Jamay, both males and females process fish as their only source of income, and it is considered an activity for single mothers and those who cannot get better jobs.  In LaPalma, fish-processing is a male-dominated activity, where women do not dare to work among the young fileting workers, who are breadwinners.

In addition to the Rosemary Firth Prize, the paper by Jennifer Meredith [University of Washington], “Fish or Flight: The Impact of Transferable Access Rights on Rural Alaskan Salmon Harvesters” was Highly Commended.  It addressed migration outcomes in rural Alaska, including those affected by gender and other factors, following lump-sum payments for buying out salmon fishing permits.  For women, the sales of their permits diminished their assets and formal employment, but helped their descendants into formal employment outside the village, thus showing that a transition to rights-based management may have unintended distributional consequences that undermine the sustainability of rural fishing operations.