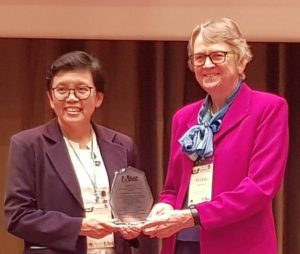 At the Opening Ceremony of GAF7, Dr Amonrat Sermwatanakul, Senior Executive Expert in Fisheries Management, Department of Fisheries, Ministry of Agriculture and Cooperatives, Thailand, was presented with a special plaque recognising her promotion of gender equality in fisheries and aquaculture, including through receiving the Grand Award  for “The Excellence on Human Right Protection and Gender Equality Promotion (Public Sector)” from the Prime Minister of Thailand. Dr Amonrat also represented the Thailand Department of Fisheries Director General at the Opening Ceremony, was a very active member of the GAF7 Local Organising Committee and led the GAF7 Field Trip. She has also attended and presented at several previous GAF conferences and is famous for her leadership in developing the Thailand ornamental fish industry for bettas (Siamese fighting fish – Betta splendens), which includes many successful women entrepreneurs.