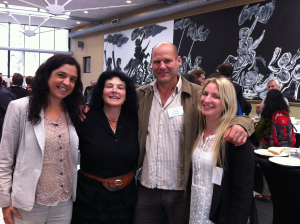 I attended the panel on gender and fisheries as part of the Centre for Maritime Research (MARE) Conference in Amsterdam, during 26 to 28th June 2013. This was the 7th People and the Sea Conference and the full title of the panel sessions was: Engaging Gender for Sustainable Fisheries Livelihoods and Improved Social Wellbeing: Perspectives from the Global North and South.

The panel presentations (which you can download from the links on this page) were food for thought, covering aspects related to gender and fisheries/marine/coastal environment, and the improvements that need to be done in the value chain, particularly on markets, identifying possible negative consequences, and ways to empower women with special attention given to women’s own perceptions of their occupational activity and their sense of self-worth. The role that women play in social cohesion and community wellbeing appeared several times during the panel, but so did the concern on women’s overburden, and the possibility of gender based violence as an unfortunate consequence of changes in gender roles. This issue was also explored during the presentation on maritime masculinities, and the expressed need to focus some of the research on men, due to the important role they also must play in attaining equitable societies. I presented the future directions of the Genderaquafish network and discussed in more detail potential joint initiatives between the Too Big to Ignore Project and the Gender Network during coffee/lunch breaks.

The first presenter was V.Vivekananandan. He talked about the traditional fishing roles in Trivandrum, Kerala, India, where women are involved in post-harvest and marketing, and men in the fishing. The presenter looked at the impact that market forces have had in fisheries livelihoods, particularly on the negative impact on women’s livelihoods – Chasing the Fish—on Shore: Livelihood Adaptations of Trivandrum Fisherwomen to Decline in Beach Landings and Changes in Marketing Systems. However, the story is somewhat different with regards to the women of the Trivandrum District, who have taken “the lion’s share of fresh and chilled fish”. These women organized themselves to access more quantity of fish than that one offered in their village by the fishermen. They make 3 times more than the men by selling fish. However, they still face some issues, such as access to water, transport and credit as well as lack of facilities for stocking their products, and facing long hours of work. Thanks to the National Rural Development Programme, they are working now to address those issues, by improving the participation of women in market management bodies and improving transport, among others.

The second presentation was by Elizabeth Mathews. The title of her presentation was “Using a gender perspective to improve marine conservation and fisheries management programs”. The Wildlife Conservation Society (WCS) carried out a rapid assessment to evaluate internally how they are taking into account gender issues, particularly by looking how the use of a gender lens can improve the community based fisheries management interventions carried out by the organization.  She then recommended taking 3 main areas for consideration: use a value chain approach when designing projects, empower women and get them involved in decision-making, and understanding better who are the winners and losers when identifying negative and unintended consequences of WCS projects.

During my presentation on “Getting Gender on the Fisheries and Aquaculture and Fisheries Agenda in Asia and the Pacific: 20 Years of Asian Fisheries Society Experience”, I provided some background information on the Genderaquafish Network, its origins, main challenges and future directions. My presentation provided feedback on a recent survey carried out to see potential areas of action to improve the work of the Network, such as obtaining funding and institutional support, developing training materials for fisheries institutions, better networking alliances and the need of leaders and champions, among others.

The presentation of Eddie Allison, titled “A ‘provocation’ on maritime masculinities – and why they matter for marine resource management”, as its name described, explored traditional maritime masculinities. He described that the gender and development research does not engage with men, focusing only in women. And despite that most fisheries social research focuses on the “fishermen”, it does not engage with relational aspects of masculinity.  GAD research depicts men as problematic (alcoholic, violent, oppressive), but there are also “traditional masculine virtues”, such as nurturers, providers and protectors of their families.  He finalized by suggesting the need to focus more GAD research in understanding better these masculine characteristics, and ultimately, engaging men in gender transformative action research. 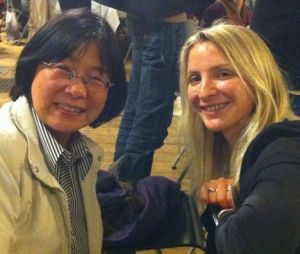 Minghua Zhao and Easkey Britton at the MARE People and the Sea VII Conference dinner.

After the coffee break, Minghua Zhao presented on “Women and Social Cohesion: Preliminary Findings in Fishing Communities in Three EU Countries”, based on an initial assessment on women’s contribution to fisheries, looking at different dimensions of human cohesion, and specifically looking at aspects related to fisheries, such as: women’s employment, income, health and education, their own perceptions of safety and also community wellbeing.  The study is currently being undertaken in the UK, the Netherlands, Belgium and France using Qualitative and Case study approaches (mainly through Observation and Interviews). It will be finalized in September 2014.

The next presentation was by NC Britton, who presented on “The hidden costs of gender-based violence in an Irish fishing community: a new pathway to policy and structural change”. She provided touching information on cases of domestic violence among traditional fishing communities in the North of Ireland, describing the factors and how these issues can be act upon, by promoting self-care among fishers and their families.

The final presentation was by Easkey Britton, on “Women as agents of wellbeing in Northern Ireland fishing households”, and the impact of change in the fishing industry on women’s wellbeing, defining the linkages to their access to fish and changes in roles. By using a wellbeing approach, she described the importance of the perceptions of people on what matters to them, especially what they prioritize and how those prioritisations link with women’s roles in fishing households.