Sex and gender (http://www.med.monash.edu.au/gendermed/sexandgender.html) Note this definition comes from a university medical site.

Gender describes the characteristics that a society or culture delineates as masculine or feminine.

Gender (definitions in a slightly amended version of that given by the FAO Aquaculture glossary (http://www.fao.org/fi/glossary/aquaculture/default.asp, source Mosse 1993).

Gender refers to the qualitative and interdependent character of women’s and men’s position in society.

Gender roles vary across time, place and region according to changing values, practices and technologies. Gender roles and responsibilities are largely socially constructed and are the basis for the structure and organisation of women and men’s differential relationships with their environments, the economy, their resource utilisation patterns and strategies.

Gender relations are the relations of power and dominance that structure the life chances of women and men.

Gender equality (1) is when women and men enjoy equal rights, opportunities and entitlements in civil and political life. http://www.fao.org/gender/gender-home/gender-why/why-gender/en/.

Gender equality (2), equality between men and women, entails the concept that all human beings, both men and women, are free to develop their personal abilities and make choices without the limitations set by stereotypes, rigid gender roles and prejudices. Gender equality means that the different behaviour, aspirations and needs of women and men are considered, valued and favoured equally. It does not mean that women and men have to become the same, but that their rights, responsibilities and opportunities will not depend on whether they are born male or female. (International Labor Organization 2000, p. 34-5).

Gender equity (1) means fairness and impartiality in the treatment of women and men in terms of rights, benefits, obligations and opportunities.  http://www.fao.org/gender/gender-home/gender-why/why-gender/en/.

Gender equity (2) means fairness of treatment for women and men, according to their respective needs. This may include equal treatment or treatment that is different but which is considered equivalent in terms of rights, benefits, obligations and opportunities. (International Labor Organization 2000, p. 34-5).

The process of assessing the implications for women and men of any planned action including legislation, policies, and programmes, in any area and at all levels. (UNESCO 2000)

The WID Approach focused on how women could be better integrated into the existing ‘men/male made world’ and corresponding development initiatives. Targeting women’s productive work to the exclusion of their reproductive work, this approach was characterised by income-generating projects for women which failed to address the systemic causes of gender inequality. (Commonwealth Plan of action on Gender and Development, 1995).

.. focuses on the socially constructed basis of differences between men and women and emphasizes the need to challenge existing gender roles and relations. (Reeves and Baden 2000) http://www.bridge.ids.ac.uk/reports/re55.pdf

the process by which individuals, groups, organizations, institutions, and societies develop their abilities – both individually and collectively – to set and achieve objectives, perform functions, solve problems and to develop the means and conditions required to enable this process.

According to the definition in Wikipedia:

Intersectionality is a feminist sociological theory first highlighted by Kimberlé Crenshaw (1989). Intersectionality is a methodology of studying “the relationships among multiple dimensions and modalities of social relationships and subject formations” (McCall 2005). The theory suggests—and seeks to examine how—various biological, social and cultural categories such as gender, race, class, ability, sexual orientation, and other axes of identity interact on multiple and often simultaneous levels, contributing to systematic social inequality. Intersectionality holds that the classical conceptualizations of oppression within society, such as racism, sexism, homophobia, and religion-based bigotry, do not act independently of one another; instead, these forms of oppression interrelate, creating a system of oppression that reflects the “intersection” of multiple forms of discrimination.

Patriarchy (from Greek: Patria meaning father and arché meaning rule) refers to a society in which male members predominate in positions of power. The term “patriarchy” is also used in systems of ranking male leadership in certain hierarchical churches or religious bodies, such as the Greek Orthodox and Russian Orthodox churches.

In a matriarchy, power lies with the women of a community. Conclusive evidence for the existence of true matriarchal societies turns out to be elusive. There are examples, both historical and current, of societies in which lineage is determined through the mother, or in which women hold dominant positions in the family structure. However, such societies generally occur in times of societal stress or instability, where the men are absent or unreliable. Successful societies, in which children are raised to continue and advance their culture, are those in which men and women together take responsibility as spouses and parents in the home.

Feminism comprises a number of social, cultural and political movements, theories and moral philosophies concerned with gender inequalities and equal rights for women. The term “feminism” originated from the French word “feminisme,” coined by the utopian socialist Charles Fourier, and was first used in English in the 1890s, in association with the movement for equal political and legal rights for women. Feminism takes a number of forms in a variety of disciplines such as feminist geography, feminist history and feminist literary criticism. Feminism has changed aspects of Western society. Feminist political activists have been concerned with issues such as individual autonomy, political rights, social freedom, economic independence, abortion and reproductive rights, divorce, workplace rights (including maternity leave and equal pay), and education; and putting an end to domestic violence, gender stereotypes, discrimination, sexism, objectification, and prostitution.

Empowerment of women and girls

The empowerment of women and girls concerns their gaining power and control over their own lives. It involves awareness-raising, building self-confidence, expansion of choices, increased access to and control over resources and actions to transform the structures and institutions which reinforce and perpetuate gender discrimination and inequality. This implies that to be empowered they must not only have equal capabilities (such as education and health) and equal access to resources and opportunities (such as land and employment), but they must also have the agency to use these rights, capabilities, resources and opportunities to make strategic choices and decisions (such as is provided through leadership opportunities and participation in political institutions).

Commonwealth Plan of action on Gender and Development, 1995.

Mosse, J.C. (1993) Half the World, Half a Chance. An Introduction to Gender and Development. Oxford: Oxfam UK.

Looking for something specific?

Photo of the Month 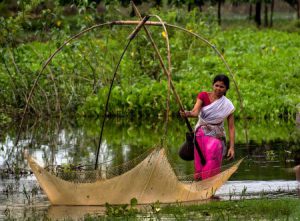