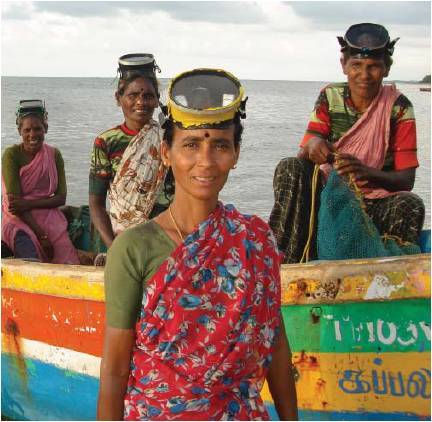 Diving refers broadly to the act of swimming underwater. Both women and men dive to catch seafood. In a few locales, women are the main divers.

On Jeju Island (Korea), diving is even considered women’s work.1 Examples of women divers around the globe are the Haenyo or “woman of the sea” of Korea,1 the women divers of Japan (Ama),2 the women seaweed collectors of the Indian part of the Gulf of Mannar3,4 and the women divers of Atauro Island, Timor-Leste (Wawata Topu).5 In contrast with the activity of the first two groups, whose diving activity has been long recorded in ancient chronicles, the seaweed collectors of India and the women divers of Timor-Leste started diving only a few decades ago. Scattered documentation on other women diver groups may be found amongst other fishing communities such as the Bajau Laut (Philippines, Malaysia and Indonesia), however, little information on their work exists.6

Women divers make a living by catching molluscs such as abalone, topshells, oysters, octopus, crustaceans such as lobsters, echinoderms such as sea urchins, sea cucumbers, reef fish and aquatic plants such as sea mustards (the kelp Undaria pinnatifida) and other seaweeds.

Women divers use tools such as spears and spearguns5 as well as a diverse range of metal utensils, shaped and made out of materials suited to catching the target species1. Hand collecting of seaweeds4 and other benthic species are also common. Women may also dive to assist fish netting5. While diving, women may store their catches in belts wrapped around their waists5, on support boats or by using nets suspended from the surface with floats.1,2 Diving operations can be carried out by individuals but many of the women belong to collectives and most commonly they dive in groups. For specific resources, women depend on the aid of a boat and a boat operator, who gets a share of the benefits.2 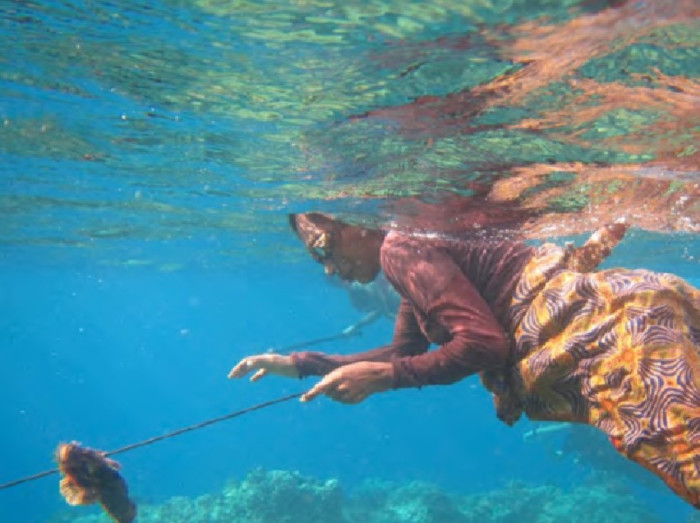 In the last decades as their economic positions have improved, all Korean and Japanese divers have taken to using wetsuits.2 As Indian and Timorese women dive in warmer waters, they dress in fabric clothes and rubber slippers, hand made flippers4 or even flip flops.5 Amongst the Timorese, many women use wooden home-made goggles.

Despite the advances in diving technologies, women divers have barely changed their diving techniques. Breath-hold diving (apnea) is the most widespread technique. In most countries, aided diving, using hookah systems or oxygen tanks, is expensive and also is prohibited or strongly regulated, and therefore is generally regarded as unsustainable for many women’s fisheries. 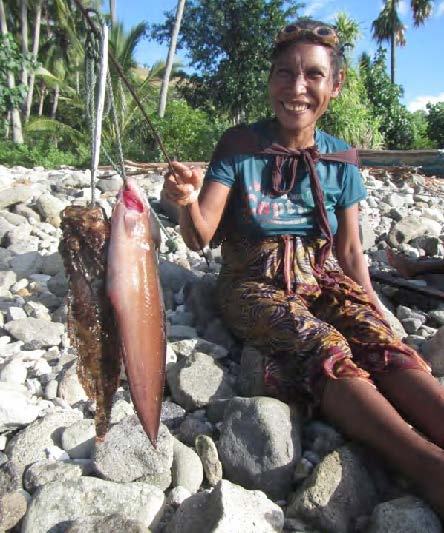 In many instances women’s dive fishing is a principal source of wealth in their household economies, both in cases where they are the sole adult income earners as well as when they share this role with their partners.1,2,5 Many as well combine fishing with other complementary livelihoods,1,5,7 either during fishing bans1 or year long.5 Furthermore, among these groups women commonly combine productive work with the household responsibilities.2,5 In recent decades, the rising price of some of the products women divers harvest, e.g., abalone and sea cucumber, has positively impacted women divers’ incomes1,2. However, typically, women divers have a low social status.1,2,4,7 At locales where livelihood options have widened and social mobility is greater, this social stigma has led to ageing populations of divers due to the lack of interest by young women who consider it a hard and dangerous occupation to continue diving.1,2 Economic development has in fact been reported to contribute to inequality by strengthening the division of labour and reinforcing the consideration of women’s diving as agrarian work.8 The widespread transformation to global capitalism and its associated cultural values and aspirations for social mobility might already be impacting in the aspirations of young women divers in developing countries,5,7 as they have done in Korea and Japan.

Despite the fact that regular breath hold diving brings a number of health problems, some women divers reportedly value their occupation for its physical benefits and the sense of freedom, community and self-expression.1 On top of health issues, women divers currently face the negative effects of water pollution, destruction of habitats and declining catches.1,2 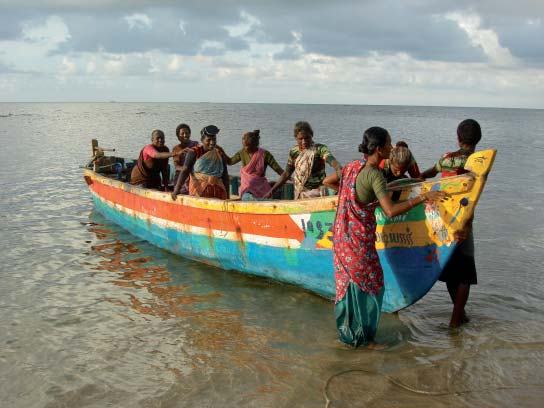 In the case of India’s Gulf of Mannar, fisheries regulations have being reported to affect negatively their livelihoods. The negative effects of fisheries regulations are inextricably linked to the resource managers’ overlook of their occupation. The women’s diving does not get counted in official fisheries statistics, as is the case also for other low investment fishing operations such as reef gleaning. In addition, women’s seaweed collecting is considered to threaten conservation4 but the women are not included in conservation consultations and thus lack the opportunity and rights to demonstrate their knowledge on the marine environment and to influence state regulatory policies. Even in countries such as Korea and Japan where women’s diving is not overlooked and where they are members of fishing associations, women do not occupy positions of influence or relevance in decision making.2 As main users of the fishing resources, they should be regarded as knowledgeable individuals and should be engaged as active agents for an adequate fisheries governance.

To see all our posts on women divers, click HERE .

Research questions on gender and diving