The recently completed project, USAID Oceans and Fisheries Partnership (USAID Oceans: 2015-2020) had human welfare and gender (HWGE) in fisheries as one of its workstreams, along with technology development for an electronic Catch Documentation and Traceability system (eCDT), Ecosystems Approach to Fisheries Management (EAFM), Public-Private Partnership (PPP) and Regional Collaboration. USAID Oceans was implemented by Tetra Tech ARD in collaboration with the Southeast Asian Fisheries Development Center (SEAFDEC) and the Coral Triangle Initiative for Coral Reefs, Fisheries and Food Security (CTI-CFF). The two learning sites were in Bitung, Indonesia and General Santos City, Philippines.

Gender integration did not only remain as part of the project proposal and documents, but since Day 1 way back in May 2015 until even after its completion in May 2020, the gender work done with partners, and the knowledge products and resources produced, continue to be referenced and remain available to those who need them. The HWGE workstream supported and complemented project activities by addressing human rights and welfare concerns along the fisheries value chain. These concerns included gender and labor issues that have become increasingly important to a growing number of value chain actors including consumers concerned about the sustainability and traceability of the food they produce, process, trade and consume. Each member country appointed a gender focal person to be part of the regional Technical Working Group (TWG) to provide technical guidance and support to USAID Oceans work in the region, and to facilitate the implementation of HWGE workstream activities.

In June 2020, USAID Oceans released the “Regional Document on Gender Integration in the Fisheries Workplace” that is available for download at https://www.seafdec-oceanspartnership.org/resource/regional-document-on-gender-integration-in-the-fisheries-workplace/.

During the USAID Oceans Inception Workshop in September 2015, attended by representatives from SEAFDEC member countries, CTI-CFF Regional Secretariat, and other regional organizations, private sector and civil society, questions such as the following were asked by the fisheries technocrats: “Why is there a gender component in a fisheries technology project?” “How are we going to apply gender in our fisheries work even if we understand it is important?” “Where can we find materials to help us understand and know how to apply gender in fisheries?” It was clear then that the majority of institutional partners and members were not as sensitized to gender, particularly in understanding the rationale for a gender component in a fisheries activity or project with technology development as its main output.

Thus work on this Regional Document commenced during the first USAID Oceans Regional TWG Workshop in 2016 organized with the Southeast Asian Fisheries Development Center (SEAFDEC). During this workshop, the initial TWG for Human Welfare and Gender Equality (HWGE), composed of members from SEAFDEC member countries, met to provide inputs on how gender mainstreaming and integration could be implemented in the fisheries workplace. The members understood the importance of gender integration in their fisheries work, and along with this understanding, they expressed the need for building their capacities and providing materials that could be used as references or guides to implement gender-sensitive fisheries work and activities.

Contributions from members were obtained in subsequent years during annual regional events when HWGE TWG members gathered from 2016 to 2020. In addition, during the 2017 Regional Gender Workshop (USAID 2017), HWGE TWG members were joined by the CTI-CFF Women Leaders’ Forum (WLF) representatives from the Coral Triangle member countries. In 2019, CTI-CFF WLF and development partners conducted a stocktaking on gender-related policies and legal framework in the Coral Triangle, spearheaded by The Nature Conservancy. Relevant information from the stocktaking report is also included in this Regional Document. The inputs provided are based on actual experiences of the contributors in the fisheries workplace, which, spanning across the Southeast Asian and Coral Triangle countries, reflect various contexts and nuances.

From gender analysis to gender interventions at the learning sites

USAID Oceans conducted gender analyses in 2017-2018, and implemented gender interventions in 2019-2020 at the learning sites in Indonesia and the Philippines. The gender analyses captured the differences and disparities occurring in the fisheries industry based on the gender domains framework overlaid with the value chain analysis framework. The analyses resulted in the identification of gender issues and needs that constrain the attainment of gender equality in fisheries. The results have served to point out strategic areas of intervention to promote gender equity and women empowerment in the tuna fisheries value chain at the learning sites, with the view that the methodologies used and information obtained could be applied and used in the region, respectively.

Informed by the results of the gender analyses, interventions were designed to address observed gender inequities that hinder the maximum participation of women in the tuna fisheries value chain.

In the Philippines, the National Network on Women in Fisheries in the Philippines, Inc. (WINFISH), received a one year grant from the USAID Oceans to implement the gender interventions in General Santos City. The activities consisted of the following: (1) gender-responsive governance, specifically the review of existing local laws/ordinances, the drafting of gender-responsive legal instruments, and submission to the Local Government Unit for consideration; (2) establishing partnerships with public and private stakeholders, including the establishment of a local gender network and website, Memoranda of Agreement between WINFISH and the academe and local government, and identification of gender in fisheries advocates and champions and developing profiles; (3) development of a gendered capacity building platform including a Training of Trainers module, specifically for EAFM and eCDT; and, (d) development of knowledge products and communication materials in various formats for specific audiences (value chain players and enablers). This website documents the activities and is a platform for the local gender network to sustain the gender advocacies in the sector (https://gendernetworkinfisheries.msugensan.edu.ph/).

In Indonesia, USAID Oceans implemented the gender interventions in collaboration with local partners in Bitung. The activities consisted of the following: (1) Capacity Building: Training on Gender Concepts and Tools in Sustainable Fisheries Management for fisheries stakeholders from the public and private sector, academe and civil society; and Training on Financial Literacy and Management for Women in Fisheries (fishers, processors, traders, public servants and civil society); (2) Development of Women and Gender Champions in Fisheries Profiles; (3) Development of Legal Instrument to Promote Gender Equity and Women’s Empowerment in Fisheries; and (4) Strengthening Partnerships and Establishing a Local Gender Network. Through these interventions, it emerged that a few groups of women in Bitung are going out to sea to catch fish, contrary to what is commonly accepted knowledge that only men fish (https://www.seafdec-oceanspartnership.org/news/i-am-a-woman-fisher-from-bitung/).

Drafting instruments for the legal basis and to guide practitioners

As part of promoting gender responsive fisheries governance, USAID Oceans gender interventions produced legal instruments to serve as legal basis and guidance for practitioners from public and private sector to integrate gender in their work.

Putting gender champions, women fishers and traders in the spotlight

Profiles of women leaders and gender champions were also developed to recognize their exemplary work in the fisheries sector. The women leaders are those who take the lead in their respective fisheries activity / node in the fisheries value chain. Gender champions are women and men who support and promote gender equity and women empowerment in fisheries. Through acknowledging these leaders and champions for the advocacy of gender equity and women empowerment in fisheries, there will be recognition and appreciation of their efforts, their value, their worth. This will empower them to keep going with their passion and commitment to contribute to sustainable fisheries management. As women leaders and gender champions, they become role models to the youth, so the fishing communities and our society can sustain efforts for better and more equitable fisheries, coastal and marine resources management. A few of them can be found here: https://www.seafdec-oceanspartnership.org/news/usaid-oceans-celebrates-iwd-2020/ and https://www.seafdec-oceanspartnership.org/news/usaid-oceans-celebrates-iwd-2020/ .

A legacy of practical gender materials and reports

A number of gender materials and reports have been produced by USAID Oceans which can be used as references for gender planning, research, training and implementation. These are listed below with links for downloading: 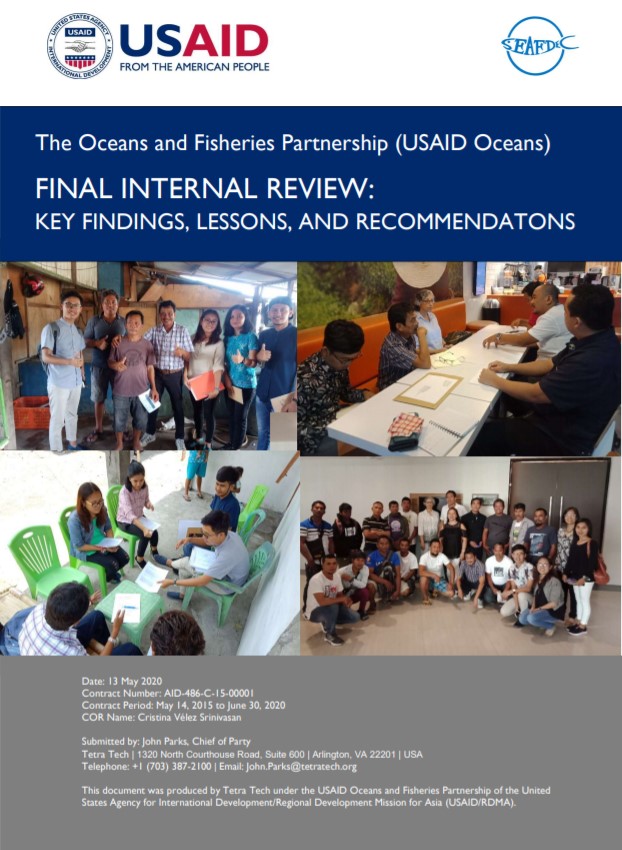 Just after the above post was published, the USAID Oceans and Fisheries Partnership released its final “Impacts and Lessons Learned” report that can be downloaded here. USAID Oceans focused on four technical areas—strengthening eCDT systems; using eCDT to better regulate fishing and curb IUU practices; developing strategic public-private partnerships that capitalize on innovative technological expertise; and integrating human welfare and gender considerations throughout all activities for more equitable supply chains. Gender recommendations were woven throughout the lessons learned and the next steps.

* Arlene Nietes Satapornvanit was the Gender Integration Specialist of the USAID Oceans and Fisheries Partnership (2015-2020) and led the development of the major body of materials and activities on gender as reported in this Story. She is also the Treasurer of the Gender in Aquaculture and Fisheries Section of the Asian Fisheries Society.

Featured image for this story is of a woman tuna trader at Bitung, Indonesia. Photo courtesy of USAID Oceans.