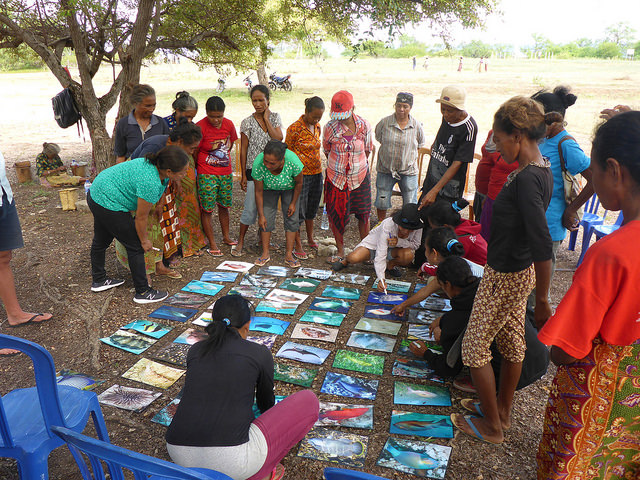 Women’s focus group, Timor-Leste. Photo by Alex Tilley. Women of Ililai conduct a diagnostic exercise to identify species important to them in categories of food, income and culture.

Globally, relatively few data are available about women’s role in small-scale fisheries, despite their active participation as fishers, processors, traders and marketers.

This calls for greater efforts by researchers, national fisheries agencies and global policymakers to collect and report separately on women’s and men’s contributions to this sector.

“When we only collect data on men, we miss half the story. If we want to make informed decisions about our fisheries we need to find ways to count all the people involved,” says Dr. Danika Kleiber, a Research Fellow, working with WorldFish and James Cook University on gender and small-scale fisheries, particularly in the Pacific region.

Sex-disaggregation ‘should be the default’

Sex-disaggregated data accounts for an individual’s sex—in sampling strategies, in data records and through analysis. Use of these data in research provides a more complete picture of the complexity and reality of small-scale fisheries.

Recognizing this, the Illuminating Hidden Harvests research will be filling the data gap using secondary sex-disaggregated data in its global study of the contributions, drivers and impacts of small-scale fisheries.

“We’ll work with local experts to find fisheries-related sex-disaggregated data that shows women’s and men’s participation in fisheries, but also the benefits they derive from fisheries such as livelihood and nutrition,” says Kleiber, who is co-leading the Illuminating Hidden Harvests’ gender analysis.

“We know women contribute—we want to be able to say how, and how much.”

Led by WorldFish, the FAO and the Nicholas Institute of Duke University, the study is expected to be published in late 2020 and will be the most comprehensive understanding of small-scale fisheries globally. 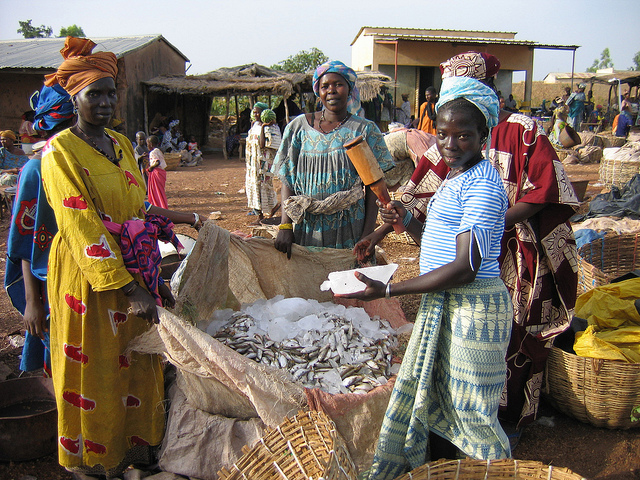 Fish traders in Mali. Photo by Edward H. Allison, 2004. Fresh fish reach Bamako from the Seligue reservoir thanks to access to ice for storage.These women fish traders benefit by getting better prices for their product, Mali, Africa.

“The methods developed to characterize and quantify men’s catch can easily leave out women. We can’t just add an extra box to tick for male or female. We have to completely rethink how we collect data,” Kleiber says.

Despite the challenges, Kleiber believes all researchers should still pursue sex-disaggregated data. She is currently channeling her efforts, along with partners SPC, WCS and ACIAR, to develop and implement better methods for data collection throughout the Pacific region.

“Getting a representative sample is a foundation of good science. Always ask yourself ‘who is missing?’. Sex-disaggregation should be the default for research on human populations. It makes research harder because you can’t just go down to the dock or the market, but it is important.”

In developing countries, women face substantive challenges in engaging in and equitably benefiting from small-scale fisheries. At play are a number of factors, including limited control over assets, constraining gender norms and barriers to sustaining entrepreneurship.

Yet at the national level, there is often a lack of sex-specific data and knowledge on women’s role in small-scale fisheries and the barriers they face. This contributes to gender issues being not well understood, hindering efforts to achieve gender equality.

“A recent study in 15 Pacific Island countries showed that gender was poorly represented in national coastal fisheries policies. This was because fisheries officers were often ambivalent toward the idea of gender as being important in the sector,” says Dr. Meryl Williams, Chair, Gender in Aquaculture and Fisheries Section of the Asian Fisheries Society. 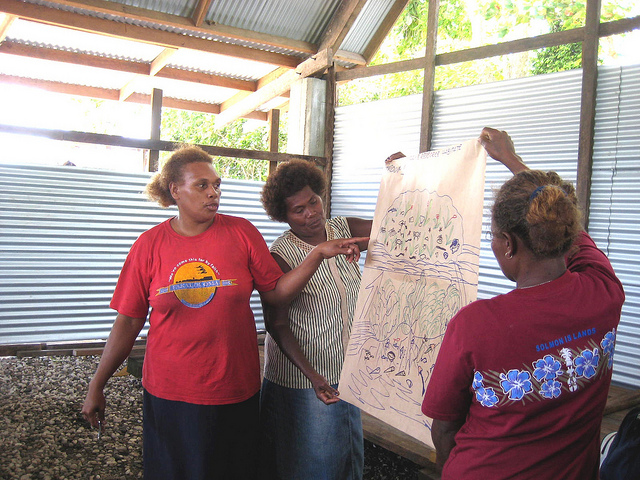 Williams says this demonstrates the global need for more education and capacity building for staff in fisheries agencies who have the main responsibility for collecting sex-specific data.

“Long-term capacity building efforts are needed to enable a deeper understanding of gender issues in the local context. For example, gender should be included in all training for fisheries officers and as a topic in university courses related to fisheries,” says Williams.

Such efforts, she says, will hopefully inspire fisheries agencies to understand and take up the cause for collecting sex-disaggregated data.

“My dream is that fisheries agencies take a whole-of-value chain approach in data collection, working with other non-fisheries agencies where needed, and take a comprehensive approach to what’s counted as small-scale fishing. This will ensure that the whole sector and all communities benefit by being fully included and counted in the data.”

At the global level, there are promising signs of the emerging use of sex-disaggregated data in policy and dialog, says Nicole Franz, Fishery Planning Analyst, FAO.

“Since 2016, member countries have been asked to provide sex-specific data on small-scale fisheries as part of the FAO Code of Conduct for Responsible Fisheries questionnaire. The data we’ve received is limited to date, but we continue to support country efforts to gather and report on sex-disaggregated data. Another key example is the State of the World Fisheries and Aquaculture 2018 report produced by FAO, which provided sex-disaggregated employment statistics for the first time,” Franz said.

These examples support progress towards SDG 5 and align with the Voluntary Guidelines for Securing Sustainable Small-Scale Fisheries, which explicitly call on countries to produce disaggregated data in official statistics.

Franz says such efforts are raising awareness of women’s contributions among policymakers. “For example, the first Hidden Harvest report published in 2012 showed that women make up 47 percent of the workforce in fisheries and have very diverse roles. These findings created a huge upswing in attention on gender in fisheries,” she said, noting that the research continues to be widely cited.

While there are promising signs of progress, it’s clear that much more needs to be done at all levels to ensure that women in small-scale fisheries are empowered, counted and heard. 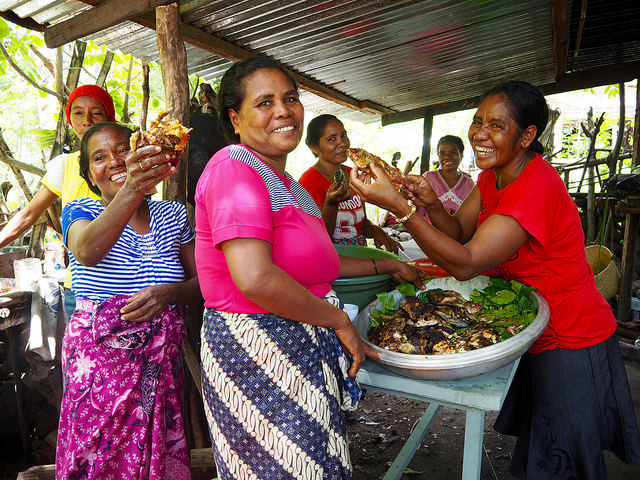 Margarida da Costa, Atauro Island, Timor-Leste. Kate Bevitt, 2016. Fisher Margarida da Costa is happy a fish-aggregating device has been installed near her village as it’s providing a reliable daily fish catch, which she sells to buyers from the capital city Dili.