Participants on opening day of GAF7 at Asian Institute of Technology, Bangkok.

Emerging research methods and unique technologies that empower and benefit women, alongside women fishworkers’ organisations around the world, are helping to close the gender gap in fisheries and aquaculture. But more still needs to be done to ensure that women are heard, counted and empowered in local to international policy and decision-making arenas.

These were the key themes that emerged from Expanding the Horizons, the 7th Gender in Aquaculture and Fisheries conference in Bangkok on 18-21 October 2018, which brought together around 150 experts, researchers and practitioners to discuss strategies to enhance gender inclusiveness and equality.

Turning #MeToo into #WeToo in aquaculture and fisheries 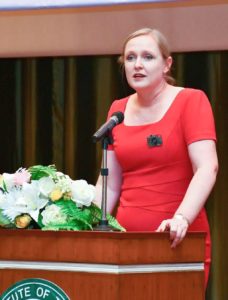 “The seafood industry doesn’t work if there’s no women, just like it doesn’t work if there’s no fish. The world needs seafood to feed, and the industry needs women to make it happen,” said Dr. Darian McBain, Global Director for Sustainable Development, Thai Union, in her keynote address. This set a vibrant yet serious mood for the conference organized by the Gender in Aquaculture and Fisheries Section of the Asian Fisheries Society, the Asian Institute of Technology and the Network of Aquaculture Centres in Asia-Pacific.

Over the four days, delegates heard 95 presentations and participated in nine special workshops. The conference, with sponsors including ACIAR and WorldFish, was organized around the themes of gender assessments, gender-disaggregated statistics, the seafood industry, governance, climate change, the sustainable development goals, research methods, and learning exchanges.

The broad range of topics reflects progress among the delegates says Holly Hapke, a member of the organizing committee who’s been involved with the GAF network and conference since 2008. “There’s been a movement toward more advanced gender analysis, evidenced by research into diverse areas such as the struggles of migrant women and women’s position in value chains,” said Dr. Hapke, who is the Research Development Director at the University of California, Irvine.

New research methods are emerging that empower women in the process, not just the outcome, and give them greater voice. One such method is the gender transformative approach (GTA), on which Cynthia McDougall, Afrina Choudhury and Steven Cole from WorldFish ran a special workshop.

“GTA aims to spark women and men to critically self-reflect, leading to shifts in structures such as social norms and dynamics that perpetuate and reproduce inequalities. This is about households themselves deciding what works for them together to drive this change process and create enduring positive outcomes,” Dr. McDougall said.

Another novel research approach that’s increasingly being used in fisheries is photovoice, which was the focus of a special workshop by Janine Pierce, an adjunct research fellow at the University of South Australia and a board member of Aquaculture without Frontiers (Australia). “Photovoice gives the chance to tell stories to participants (often women) who may not have had a voice previously to tell their story,” said Dr. Pierce.

The method involves giving participants cameras to take photos on loosely-worded themes and to write or describe accompanying comments in a diary. To provide some hands-on experience, a handful of delegates including Chelcia Gomese, Senior Research Analyst from WorldFish Solomon Islands, participated in a photovoice project at the conference.

“I really enjoyed doing it, and I’m now planning to use photovoice in some upcoming research in the Solomon Islands to understand what matters to women around fisheries,” Gomese said. “I hope that this will raise the voice of women and communities at the government level and influence policy.”

A number of gender research approaches are being applied to fisheries and aquaculture, providing new insights into gender inequality. 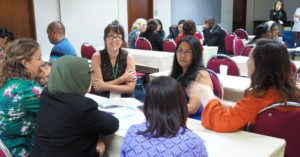 Men and women sharing knowledge about gender and intersectionality 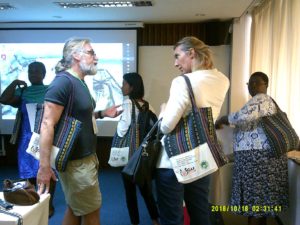 Sharing knowledge through lively discussions during and around the GAF-101 Training Workshop on Intersectionality.

One example is intersectionality, which was the focus of a special workshop by Marilyn Porter, Professor Emerita, Memorial University, Canada, and Holly Hapke.

“Women are not all the same,” said Dr. Porter in the workshop. “For example, a woman fisher in India will have a different experience than a male fisher or a Canadian woman fisher even though they are all fishers. Intersectionality allows us to unpick the differences in experiences and identities as well as, more importantly, see how these differences interact to affect the overall experience of both individuals and groups. In turn, this leads to a more sophisticated analysis and better targeted policy interventions.”

Another research approach that holds value—and needs deepening—is the feminist perspective, which was the focus of a special workshop by Nalini Nayak and Cornelie Quist, founding members of the International Collective in Support of Fishworkers.

“Feminist researchers and activists in alliance with fishworker movements need to develop a cohesive conceptual framework that includes development approaches and policy measures,” said Nayak. “This should be focused on achieving socially and environmentally-just fisheries that sustain life and livelihoods. Such a framework will be critical to understanding the diverse and changing lives of women in fisheries in relation to the impacts of unsustainable global fisheries.”

Many presentations highlighted how the introduction of new gender-sensitive technologies are enabling women to more fully participate in and receive benefit from fisheries and aquaculture.

One example, presented by Cecile Brugere, director, Soulfish Research and Consultancy, was on tubular nets for seaweed production in Zanzibar, which are showing promise for women’s empowerment, livelihoods and the environment.

“From two years of testing, we found that the tubular nets enhanced the growth and productivity of higher value seaweed strains, generated income and strengthened the links between women producers.”

But innovations are never gender neutral she reminded delegates. “If an innovation it is to change gender relations in a positive way, for example by empowering women, it needs to be introduced very sensitively and its uptake monitored over time alongside continuous capacity building.”

A key theme of the conference was the importance of collective action by women, which was underscored by comments by Belinda Richardson, Fellow, Bill and Melinda Gates Foundation.

“Collective action is critical to driving policy that works for women. This is a herculean effort, because it’s often very difficult to bring those voices to the tables,” she said.

But some examples presented at GAF7 offer hope. One, on the successes of the African Women Fish Processors and Traders Network (AWFishNet), presented by Editrudith Lukanga, the Secretary General, consists of women from 28 African Union countries.

Some of the presenters and participants gather at the conclusion of the AWFISHNET workshop.

“Since forming in Tanzania in April 2017, we’ve been able to attract funding, which is huge success for us because resources are normally scarce and it enables us to come together. Through the network we’re raising our voices, in a unified way, for the inclusion of women in all decision making and policy processes, from planning to implementation to monitoring,” Lukanaga said.

On this topic, delegates benefited from the insights of Margaret Harding, a fish processor and vendor, and one of the 25 members of the Central Fish Processors Association in Barbados—the only post-harvest fisherfolk organization in the country. “Having the organization enables us to work freely. It enables us to do the things that we want like the upkeep of the market, abiding with regulations and complying with governance,” she said of the organization that was formed in 2005.

Her advice to other fisher women is to be vocal. “Get together. Make sure your voices are heard. It can happen. Let all of the women fisherfolk come together to work as one,” she said.

More work to be done

Participants listening intently during one of the many absorbing GAF7 sessions.

At the conference, Dr. Meryl Williams, Chair of the GAFS launched the new From catch to consumer: Why gender matters in aquaculture in fisheries article as part of the Gender in Aquaculture and Fisheries website.

The article highlights the key actions that are needed to make real progress toward gender equality —all of which were raised and discussed at the conference.

To count women, key stakeholders such as fisheries agencies need to collect regular and accurate gender-specific employment data on the catch-to-consumer pathway to track trends and progress.

By supporting women’s empowerment, women can collaborate, assert their rights and upgrade their capacity, which requires funding and support for education, advocacy and legal resources.

To make women more visible, gender equality must be a stated priority in policy, research and development programs.

Investment into targeted gender projects, research and educational outreach needs to increase significantly, even a hundredfold, to achieve impact.

“It is only by working in a collaborative way—through transdisciplinary approaches and integrative policies with grassroots organisations and policy makers—that we can make real progress toward sustainable and socially-just small-scale fisheries and aquaculture,” Dr. Kusakabe said. 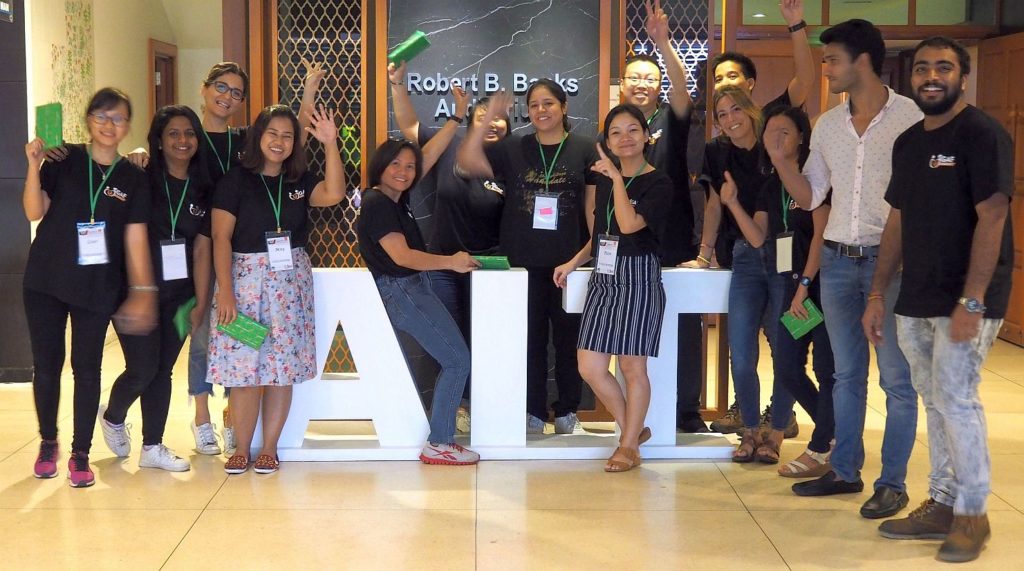 Thanks to the GAF7 Volunteers from AIT, who, under the leadership of Veena, helped make all the events flow smoothly.

The conference was organized by the Gender in Aquaculture and Fisheries Section of the Asian Fisheries Society, the Asian Institute of Technology and the Network of Aquaculture Centres in Asia-Pacific. It was sponsored by the Australian Centre for International Agricultural Research, WorldFish, The Crawford Fund, Plan International, USAID Oceans and Fisheries, Thailand Convention and Exhibitions Bureau and the Commission on Gender and Geography, and had 17 partners and supporters from Asia, Australia and beyond.