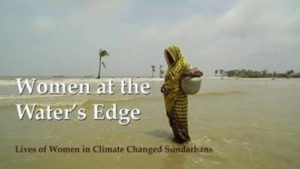 The film is based on my ongoing research on the effects of climate change on women living in the villages of the Sundarbans, focusing on how they are facing up to the challenges thrown by the rising sea levels, higher tidal surges that breach through the embankments that protect villages and farmlands, more frequent and more intense cyclonic storms and so on.

Although everyone’s life is changing, women are affected more than men as they carry out the daily chores – collecting fresh water as salinity creeps into the soil and underground aquifers.

The film was made in collaboration with my colleague, Ronodeb Paul, of Kolkata, India.

Rono and I were in the Sundarbans at the height of the monsoons; the rivers were swollen and the tides was fierce. It was very scary to cross some of the river channels to get to the chars or river islands. Once in the villages, it was not much easier; the fine-grained clay that covered everything like a veneer was extremely slippery. During one of the shoots, I slipped on the wet clay and fell, causing much fun amongst the village women who had better practice at tiptoeing on the mud than me.