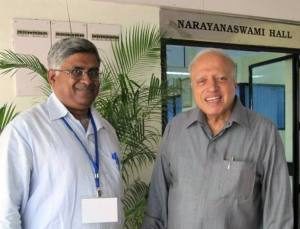 Dr M.C. Nandeesha and Prof M.S. Swaminathan together during a 2011 conference in Chennai on mangrove conservation. Photo: Piyashi DebRoy.

Dr. Mudnakudu C. Nandeesha (1957-2012), who instigated many women/gender in aquaculture and fisheries initiatives, passed away on 27 December 2012. On the 4th anniversary of his passing, we pause to remember him and acknowledge his contributions on many fronts, including on gender awareness and action.

Dr Nandeeshabegan his work in aquaculture research and development in Karnataka State, India, and was then influential in fish breeding in Andra Pradesh. From India, he moved on to work in aquaculture and development work in Cambodia and Bangladesh, before returning to become a leading aquaculture educator in universities in Tripura and Tamil Nadu, India. Along the way, Nandeesha became very engaged and influential in institution building, through professional societies such as the Asian Fisheries Society Indian Branch, the Asian Fisheries Society, the World Aquaculture Society and Aquaculture without Frontiers, among others. He was concerned with improving the professionalisation of fisheries and aquaculture, infrastructure and bringing women and men farmers into collaboration with scientists (see his regular “Farmers as Scientists” articles in NACA’s Asian Aquaculture magazine from about 2002 to 2004: LINK).