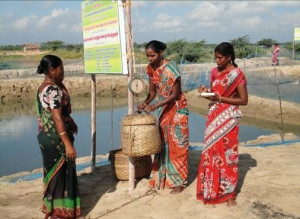 Reaching her farming site is quiet tedious. Either you need to trek to these remote villages or go in by boat. When the lake becomes dry during the summer season, you need to walk in through slushy waters to reach the ponds.

Irular tribal people are fishers and crab collectors. They fish in Lake Pulicat as well as in the adjacent sea. During the lean fishing season, their income is affected and they are compelled to look for alternative incomes. Thanks to a collaboration with scientists from the Central Institute for brackishwater Aquaculture, they are now able to consider alternative livelihoods through brackishwater aquaculture technologies like mud crab farming, seabass nursery rearing in hapas and polyculture farming of crab and seabass in a scientific way in the tide fed and community brackishwater ponds in Mrs Usha’s village.

Mrs. M. Usha has developed strong expertise in these brackishwater aquaculture technologies. Utilizing the common brackishwater resources and inputs within her village she has adopted all these technologies and has facilitated the tribal families in her village to take up alternative livelihoods for additional income during the lean fishing season.

An in-depth case study was conducted by Dr. B. Shanthi, Principal Scientist, Social Sciences Division, ICAR- Central Institute of Brackish Water Aquaculture, (CIBA, Chennai). On the basis of her study, Dr Shanthi found Mrs. M. Usha to be versatile and self-confident, have good leadership qualities, be a good motivator, and always fast to grasp new ideas. She has led 150 tribal people, both women and men in families, of this village to adopt polyculture farming of crab and seabass in the community ponds. A Women’s Self Help Group (WSHGs) named ‘Marikolunthu’ adopted crab farming in tide fed pond and Asian seabass nursery rearing in hapas.

The brackishwater aquaculture carried out by Mrs. M. Usha and other tribal families have enhanced the group’s savings. From the profit, they grew their bank accounts and reinvested this in farming. Mrs Usha communicated with others in the self-help group and strengthened internal lending among the group members. Polyculture farming has helped Mrs. Usha and other Irular tribal beneficiaries learn a new occupation for the lean fishing season. The developments also provided demonstration and leadership leading to impact among other tribal families who have slowly started adopting the technologies by investing money from their own their savings.

In the village social taboos prevailed, such as that women should not walk in front of men when the men are returning from fishing because this would lead to poor sales that day. In addition, women should not go outside their village to participate in meetings and events, and should not talk out in front of men. After the technical interventions, the tribal men became more aware of the inequalities and gave more power to the women. Actually, the women in the village overcame the taboos and beliefs when they started going outside their villages to do crab marketing. Mrs. Usha contributed her part to this empowerment.

Noticing the interest of Mrs. M. Usha and her tribal WSHGs, the International Fund for Agricultural Development (IFAD) assisted the Post -Tsunami Sustainable Livelihoods Programme (PTSLP) in Tamil Nadu. Mrs. M. Usha and her groups received funds and subsidy of Rs. 1 – 3 lakhs (I lakh is 100,000) per each group to assist them adopt crab farming. For their work, Mrs. Usha and her SHG group in Kulathumedu village were subsequently awarded the “Best WSHG of Tiruvallur District”.

In addition on the technology front, these were the first tribal families in India to take up the tedious and risky task of rearing Asian sea bass in nursery hapas in brackishwater ponds and creeks. Farm made feeds developed by Mrs. Usha and her groups gave helped nourish the seabass fingerlings.

Mrs. Usha has enhanced her knowledge and skills through training on mud crab aquaculture from the Rajiv Gandhi Centre for Aquaculture (a Society under the Indian Marine Products Export Development Authority) and, from CIBA, on fish sampling, packing of seabass fingerlings for marketing and record & account keeping.

The enterprise has developed a systematic marketing strategy that has helped the villagers learn the modern crab marketing. Mrs Usha has her own style in establishing rapport among the tribal families, WSHGs and crab marketing agents. She gains their confidence to stock water (post-moult) crabs for farming in pond and seabass fry in hapas and then to supply the harvested crabs and seabass fingerlings to the retailers and marketing agents. She has helped transfer this approach to other tribal coastal families and WSHGs.

She has strived hard to bring in a diversification of livelihoods among the tribal families by making them understand that they need an alternative livelihood to earn an additional income apart from fishing to improve their standard of living. Every day she walks 4 kms in the water-logged land to reach her work spot. She along with other tribal family members in the village devotes most of her time to improving their farming enterprises.

The adoption spread from, at first, two WSHGs and three families, and later others came forward. At present in the village, 20 families farm 20 crab ponds and 12 SGHs practice crab farming in tide fed ponds. Seeing the success, a total of 150 irular tribal families both men (82) and women (65) including new 5 WSHGs came forward with a new proposal of polyculture trials. 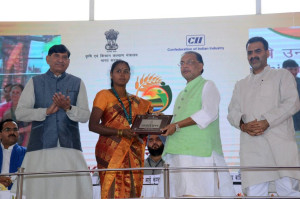 HONOUR RECEIVED
For all her contribution to her society in the adoption of brackishwater aquaculture technologies, Mrs Usha was selected for the “ICAR – INDIAN AGRICULTURAL RESEARCH INSTITUTE – IARI Innovative Farmers Award”- 2016 of India. She received this award from the Hon’ble Union Minister for Agriculture and Farmers Welfare of India Shri. Radha Mohan Singh and the Hon’ble Minister of State for Agriculture and Food Processing Industries of India Dr. Sanjeev Kumar Balyan. Hon’ble Prime Minister of India Shri Narendra Modi, inaugurated this Mela during the KRISHI UNNATI MELA 2016, 19-21 March 2016 held at New Delhi.