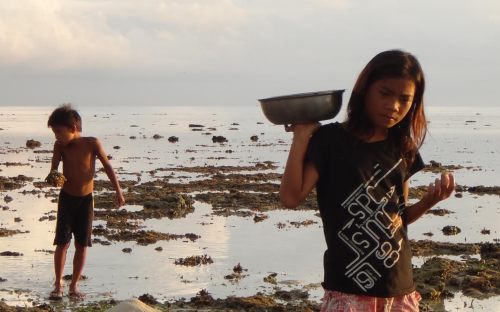 Also see our overview of gleaning and gender: Discover Gleaning

The Philippines is one of Southeast Asia’s many diverse cultural regions, and together with other Asian nations is in an area that has gone through tremendous changes, economic, social and environmental. Changes which have occurred through not only local policy but from colonial times, through to the present concept of globalism[1].  The poorest members of society live in agricultural areas and work as farmers or fishers or in urban cities work in the informal sector. One of the important areas of employment for the unskilled worker due to its many coastal, lake and inland waterways is the fishing industry.

From coastal fishing which has almost destroyed the sea gypsies of the country to small scale fisheries women are important members of this industry. They can work close to their homes, choose the hours they want and don’t require a lot of gear, whilst their children can go along with them so childcare is not necessary. Also where spiritual or gender roles prohibit women partaking in certain employment, such as fishing in boats, gleaning is an ideal way to supplement the family income. Women are not restricted by biological means but can be restricted by cultural norms. Women collect what is on the bottom of the waterways, the invertebrates whose habitats can be in reefs, mangroves and seagrass generally using their hands to collect such items as octopus, squid, prawns, crab, sea urchins and sea cucumbers. These practices are often done at night with torches or lanterns to see the catch.

Gleaning according to Klieber[2] who did research in the Bohol region, is rarely counted however when statistics are being looked at to determine how many people are involved in the fishing industry. Marine protected areas (MPAs), restricting the areas where women can glean, and the views of other stakeholders, government, big business and such also affect their efforts. Promoting gender equality is the most important part of alleviating poverty and creating equality. Programs, including women’s participation, using local knowledge and cultural adaption, community controlled MPAs which restrict ‘Malthusian’ overfishing of the local commons is one way at least to reclaim equality for many workers in the small scale fishing industry.

On Batasan Island, one of the six island Barangays of the municipality of Tubingen in the Bohol region of the Philippines, women and children glean shells, seaweed etc at low tide to support household income. This may be necessary as the women often spend their household income on illegal gambling because they are bored.[3] One negative effect of these practices is that some families force their children to leave school to help them with the gleaning, thus affecting their children’s education. School attendance in the barangays is extremely low which in turn leads to a cycle of poverty as the children eventually have to resort to the same methods of earning an income in the future.[4]