The women of Lido Village, on the north coast of Papua New Guinea, have traditionally made an important contribution to their families’ protein intake by gleaning for marine invertebrates and small fish off exposed reef flats at low tide. Unlike their counterparts in many Pacific communities, however, Lido women improve their catch by constructing “gardens” on the reef flat, which are demarcated by metre-high rock walls, and enclose numerous rock pyramids of a similar height. The pyramids provide shelters for delicacies such as catfish and octopus, which are trapped by the rock walls when the water recedes. Crushed pieces of a poison vine are dropped into the water to stun the trapped organisms. 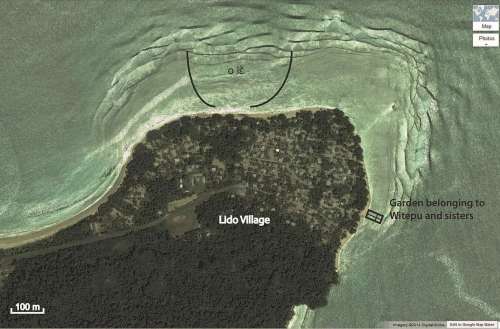 Fig. 8.2 from the chapter. Aerial view of Lido Village (N. coast PNG) at high tide, showing location of the o lɛ̃ depression in the fringing reef and the approximation of the coral garden belonging to Witepu, the mother of author Lahe-Deklin. The surf zone at the edge of the fringing reef is clearly visible, as is the seaward extent of the reef flat. Image courtesy of Google Maps.

In recent decades, an influx of imported “city” foods has significantly changed the diet of the people of Lido. As a consequence, coral gleaning has declined in importance, and the garden walls and pyramids are no longer maintained. Contact with powerful neighbouring languages, such as Bahasa Indonesia, Tok Pisin and English, has also impacted adversely on the knowledge of the names of numerous reef fish and invertebrates that were once consumed as staples. Many children are no longer able to name these common, culturally important organisms in their mother tongue, called Dumo. In a chapter of the book Ethnobiology of Corals and Coral Reefs (Chapter 8 Coral Gardens of the Dumo People of Papua New Guinea: A Preliminary Account), my co-author Francesca Lahe-Deklin and I have tried to document some of this endangered vocabulary of the Dumo language, as well as describe the cultural beliefs and practices associated with coral gardens. Historically, women would have been the main repositories of this knowledge, passing it onto the children (both boys and girls) that accompanied them on gleaning trips. The open sea beyond the reef flat is the domain of adult men, who catch large fish such as cod and shark. Women, on the other hand, specialised in tending their coral gardens in family groups, with each person in charge of a part of the garden.