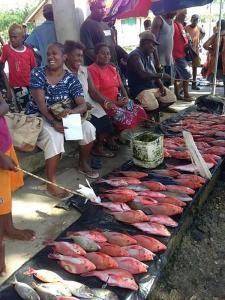 Women are particularly important in the key industrial tuna and coastal fish value chains in the Solomon Islands. They are active inshore fishers, critical in providing labour in the large SolTuna at Noro in Western Province, and in certain domains of local fish marketing.

The study not only investigated the roles of women in the supply chains, but also examined the challenges for them and others making use of their labour.

In the case of the 1,000 women working for SolTuna, almost all on the processing line, the women and their employers reported several issues. The women reported on the sex segregation of jobs on the production line, in which they ended up in the lower paying jobs, lack of suitable housing, childcare, health issues, gender based violence that affected their ability to attend work at times, and low wages.

Management in the factory reported problems of high turnover and absenteeism, and lack of budgeting skills among employees.

However, even with good will, tuna processing alone is not enough to deliver on gender equality as many of the issues have deep social roots, and the industry is battling strong competition that emphasizes controlling production costs.

However, transactional sex occurs in ports, on ships and associated with factories and appears to have arisen with the growth of the fishing industry from the 1970s onwards. Judging by the summary report, more efforts are needed to address the issues

In coastal fisheries, women in the Solomon Islands are responsible for more than half the subsistence catch and are important in marketing. Women are also involved in such (low paying) traditional activities as making shell money.

Of the range of fisheries activities for women, the most lucrative is marketing of coastal fish, which is better than working on the tuna processing line or making shell money. However, men dominate (75% in the capital Honiara) the markets, in numbers, management and the overall functioning of the system.

The report concludes with a series of recommendations.