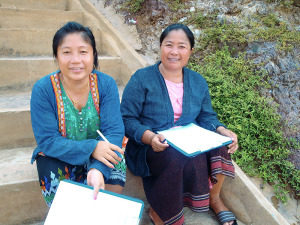 In other projects in Laos, women in Donexay village have become involved as researchers in the Nam Kading River of central Lao PDR. Photo and story: FISHBIO [Fisheries Research, Monitoring and Conservation] FISHBIO

Charlotte Moser worked among Lao fishers in the Sekong River basin that begins in Vietnam, traverses Lao PDR and flows into the Mekong in Cambodia. The project on which she worked, in Samakhixay and Saysettha districts of Attapeu Province in southern Laos, involved Lao PDR, World Bank and IUCN support. She reports [“Listening to Women Fishers on the Sekong River: Fostering Resilience in Village Fishery Co-Management“] that the advent of fisheries comanagement and new national laws and institutions such as the Lao Women’s Union and a flurry of activity, especially after the 1995 UN Beijing  Conference on Women, tended to stay at the national level.

What was happening at the local level along the Sekong, where men fished in the main river and its tributaries and women were seasonal fishers in the rice fields? Following the new national 2009 Guideline for Fisheries Comanagement, several comanagement fishery committees were established to oversee fisheries conservation zones. Elite men tended to be appointed to the committees (by village chiefs), thus cementing the status quo, whereas women, if in the committees, were elected and tended to be challenging the status quo. The national fishery guidelines did not mandate women’s participation.  Generally, the fisheries committees also avoid other difficult issues such as ethnicity, the deteriorating quality of the river water and its fishery resources, and the maintenance of fish conservation zones. Of 6 committees established in 2009 in the study area, the only committee to survive until 2013 was the one that had a woman member (who kept the committee records) and it was also the only one to maintain a conservation zone.

Charlotte Moser laments that, despite the calls to include women, and the good advice available as to how to do this, action on the ground often disappoints, as in this case in Laos. She reiterates the generally recommended steps needed, but does not underestimate their difficulty to implement.

Among these steps are including language in the national Fisheries Law that requires participation by women in village fishery management committees, creating incentives to allow women to develop new skills, ensuring more places in governance structures for women and providing opportunities for adaptive learning tailored to the experiences and interests of women in fishing villages.

Abstract: The accelerated economic development of landlocked Laos, combined with extreme climate variables, points to dramatic transformations in subsistence fisheries on its rivers. In the country’s first Fisheries Law, adopted in 2009, co-management of village fisheries is required as a way to promote sustainable development at a local level. The co-management model, however, does not stipulate participation by women fishers, important stakeholders who make up almost one-half of all Lao fishers and whose work contributes directly to family nutrition and well-being. Based on fieldwork conducted in fishing villages on the Sekong River in southern Laos in 2013, this paper takes an ecosystems approach to discuss how the country can build resilience and social cohesion into fisheries by incorporating women and their knowledge into village fishery management. In the process, the health of river ecosystems and food security will improve, while women fishers will acquire new skills to help them avoid ‘poverty traps.’