In 2000, the Western Australian rock lobster (Panulirus cygnus) fishery was the world’s first fishery certified by the Marine Stewardship Council. Since then, however, the stock has had shocks from climate shifts. The fishing communities that harvest it, especially on the remote Abrolhos Islands, have been affected both by the climate impacts and the social impacts of new management measures. In their paper, “Climate change and social impacts: women’s perspectives from a fishing community in Western Australia,” Jenny Shaw, Laura Stocker and Leonie Noble take a close look at the women’s sides of events.

Their studies are imbued with the insights of the authors from their long work in and associations with the communities, e.g., Leonie Noble has lived and fished with her husband on the Abrolhos for more than 30 years and is current President of the Australian Women’s Industry Network Seafood Community (WINSC). 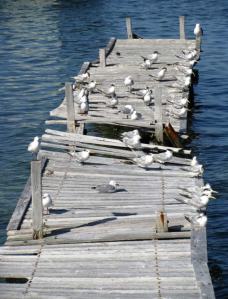 When the rock lobster larval recruitment declined dramatically in 2006, fishery management, which had become inclusive and consultative of community and women’s needs in prior years, switched to a more interventionist and top-down form, excluding women and community. The number of fishers was halved, and an output (quota) control system shifted the fishing patterns from a short season within which all fished and the Islands had a strong seasonal community, to a year round arrangement in which fishers only visit occasionally. The community, built and nurtured especially by the women, has been broken as a result of this management change. The families have relocated to the mainland, husbands often work second jobs also away from home, e.g., in mining, and social problems caused by the new stresses are growing.

Jenny Shaw and her co-authors argue that a different management arrangement could have avoided this total loss of community and identity, and would have been possible with community consultations, especially involving the women who were so committed. They also see this explicit example as yet another case in which, although lip service is paid to taking the full value chain of fisheries into account, the reality ignored the most vital social parts – women and community.

Jenny Shaw and her colleagues also won awards for their museum exhibition based on this research – follow this link to read about the exhibition.

A cascade of climate and environmental changes, government intervention and economic responses has led to major social impacts on the Western Australian fishing community of the Abrolhos Islands. In 2006, a significant decline in the number of settling lobster larvae was met with major changes to the management of the fishery. The decline in larval settlement appears to be climate driven. Stocks were protected by reducing the overall catch, but these measures also led to a decrease in the number of fishers operating in the fishery. The management changes have resulted in the decline of this well-established fishing community. From the perspectives of fishing women, this paper explores the tension between the contribution that women make to fishing and their well-documented ‘invisibility’ in this industry. The authors suggest that the lack of management focus on social outcomes and subsequent community impacts are related to the invisibility of women in the fishing industry.