These reports on the Women in Aquaculture and Fishery Session at WA2015, held at the ICC Jeju, Korea, 27 May 2015, have been written by Jin Yeong Kim, Bibha Kumari and Jenny Cobcroft. Thanks also to Aquaculture without Frontiers (AwF) Women’s Network, World Aquaculture Society, Roy Palmer and all the presenters.

Women in Aquaculture and Fisheries Presentations

The World Aquaculture 2015 (WA2015) session on Women in Aquaculture and Fisheries was held in the ICC Jeju, Korea, in Samda hall ‘A’ from 11:30 am to 17:10 pm and chaired by Jin Yeong Kim and Bibha Kumari. Seven oral presentations were made in the session, and, in relation to women’s labor, one oral presentation was made in the cage culture session and added to this summary. The session also held a panel discussion, led by Jennifer Cobcroft and followed this by the presentation of the awards WAS-APC/AwF Travel grants and AwF Woman of the Month by Mr. R. D. Palmer, President of AwF and World Aquaculture Society Director.

The main points from the presentations were as follows: 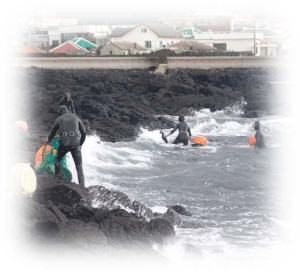 1. Hye-Kyung Choa (Korea) introduced Jeju’s unique culture of the haenyeo’s life using a short film on these female divers of Jeju Island who collect seafood and seaweed without using any breathing equipment. Although these women follow a lifelong profession that has endured and been supporting their families for many centuries, present haenyeo are no longer passing diving skills to the next generation. Recently challenges to the traditional haenyeo culture is how to manage marine resources and find effective ways to pass down their community culture.

2. Seungmok Ha (Korea) showed that site-specific MSY of turban shell harvesting by fisherwomen tended to be high where the biomass of the brown algal species was generally high. To understand the causes of the declining stock of turban shell, a long-term program is required to monitor the status of algal species and environmental and human factors that impact on them. 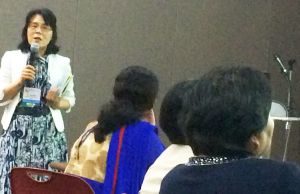 3. Jin Yeong Kim (Korea)  summarized recent changes for fisherwomen’s contribution and to the small scale fisheries in Korea. It is a commonly emerging trend in the coastal long line, jigging and gill drift net fisheries of married fisher couples for husbands to drive a boat and operate fishing gear and for wives to support the netting and collecting of products on board on the fishing grounds. Traditionally, women did not work on the boats. Issues were concentrated on the women’s new perspectives on the environmental, social, economic and livelihood changes from a fishing community.

4. Arlene Satapornvanit (NACA)  explained the assessment of gender in aquaculture in Cambodia, Lao PDR, Thailand and Vietnam under the MARKET project. Insufficient gender/sex-disaggregated data are available in aquaculture in these countries. Participation exist in varying degrees but very few women are in top positions. Therefore detailed research planning & design with statistics and data collections are needed. Information exchange among countries and practitioners, including curriculum and training development will be helpful to strengthen capacities.

5. Arlene Satapornvanit (NACA)  also explained women’s involvement in selected aquaculture value chains in three countries vis. Cambodia, Thailand and Vietnam, to identify and analyze the role and activities of women and men in the grow-out stage of aquaculture. In the case studies, she summarized, for a few women, their status apart from their families, the social and economic problems they face, and how they are successful in aquaculture in these countries.

6. Zumilah Zainalaludin (Malaysia)  expressed the need for the active involvement of women in aquaculture for future family wellbeing. For this there should be research networking for gender analysis based on activities for good aquaculture practices. She proposed a policy and program to the government that would enhance the development of the aquaculture industry. Sharing of gender training materials is also important.

8. Young-Jin Park (Korea)  described abalone sea cage culture trends and women’s role in the related job sector in the largest abalone growing area of Korea, Wando, Jeonnam Province in the southwestern area of Korea. In order to empower women, information sharing, and a stable living environment, the women asked for the support of the government for the construction of a social infrastructure, such as, women only cultural lectures, community activities, technical training program, child care facilities, pediatrics, entertainment complex etc.

The panel session commenced with Dr. Bibha Kumari summarizing the earlier presentations, especially for the benefit of those who could not attend the whole session.

A series of questions was asked of the panel members, with a focus on the WAS-APC/AwF travel award winners (Nantaporn Sutthi, Gladys Ludevese Pascual, Mya ZinOo), and then opened for a group discussion with the audience.

1. What do you see as the biggest challenge for women in aquaculture in your country?

Gladys indicated that traditionally women in the Philippines were focused on household tasks, but are more educated now and wanting to get out into the workforce.

Mya Zin discussed education, investment and cultural issues that are barriers to women being involved in aquaculture in Myanmar.
Nantaporn suggested that women in Thailand have more power in business now.

A comment from a male hatchery director from Indonesia was that there are many small hatcheries and the majority of their staff are women, largely because of their valued attention to detail. He noted that working in aquaculture grow out and in the field is problematic as these are both traditionally a “man’s world”.

The group discussed the need for women-oriented equipment to encourage their participation in different sectors. We also noted the need for us as individuals to change our mindset in relation to the role that we as women can play, and the way that we see other women in industry.

Our role is to encourage leadership skills in more women; leading by example and encouraging others.

2. What benefit would arise for the aquaculture industry by changing the situation, and if the challenge for women was overcome?

We noted that women tend to be more creative, and with education can complement the activities of men in aquaculture. The group discussed that through increased participation by women in aquaculture, production volume and efficiency could be increased. This would also improve the security of household and community nutrition. In Myanmar, the opportunity for internships has been provided by the USAID grant, allowing women to engage with industry and better understand opportunities and pathways to employment outside the university sector, which is where they traditionally stay in employment, if they stay in fisheries and aquaculture. Another of the men in the audience indicated that in Western culture, if more women become involved in the industry, they will promote seafood, leading to increased consumption – which is good for community nutrition and seafood sales. The group also discussed the need for a change in mindset of employers, across many cultures and countries, to consider the skills and value that women can bring to the industry. An observation from the Philippines was that about 10 years ago there was a difference in the proportion of women reaching higher management levels, with men and women both represented at middle management, but men being promoted to senior levels even when the women may be more competent. It was considered that this situation has improved, however the ‘glass ceiling’ still exists for many women.

3. What potential solutions do you see to addressing the challenge?

One proposed solution was access to investment funds and bank funding, promoting programs for women. Mobilizing investment through women was considered a likely way to increase aquaculture production.

One participant working with indigenous women in the Northern Territory in Australia asked the group for suggestions on how to encourage a balance for women who may be interested in fisheries and aquaculture. The women have many other cultural roles and they cannot always find time to engage in development programs. She also commented that payment or potential income from a new industry is not a primary motivator, and that cultural roles take precedence. This seems an area needing more discussion and insights from other researchers and development project leaders, specifically around how to find the right projects/opportunities and motivate engagement.

One academic reported on a study of her students over 20 years in the Philippines, and reported that in that time less than 1% of women trained in aquaculture were employed in aquaculture. It was suggested that while the current generation is suffering from differences in early childhood (expectations and roles being different according to gender), that this situation is now improving.

The Panel Discussion was then followed by the presentation of the awards by Mr. R. D. Palmer (AwF):

2. AwF for Women of the Month Awardees (see AwF for details)

A vote of thanks for all for their contributions was given by Dr. Jin Yeong Kim.