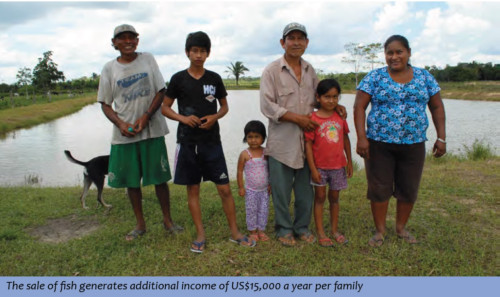 The Fish for Life project, initiated by experts from Canada, Brazil and Bolivia, and carried out with families in Yapacani, Bolivia, has succeeded in expanding the farming families’ diversity of food and farming options – previously based on single crop rice farming – by successfully introducing women-led fish farming.

The comprehensive development project, complete with pilot studies to prove up the technical options and then help for local farmers to develop their knowledge and skills, has generated an additional US$15,000 per year per family.  Since 2008, before the project, fish consumption has increased from 3.8 kg per year per capita to 5.6 kg per year per capita. This is an area that traditionally eats little fish, despite good water resources and available local species of fish. In the project, a small native fish, sabalo or black prochilodus (Prochilodus nigricans) was added to previous aquaculture attempts using just pacu (Colossoma macropomum).

The women have become majority members of the Yaqcapani Northern Integrated Pisciculture Association – APNI), coming from a former position in which they had little economic recognition to one of leadership in an important new economic activity. Their husbands have gone from scepticism to strong support.

To read more about this interesting success story, click this link from the website of the Canadian International Development Research Centre (IDRC).