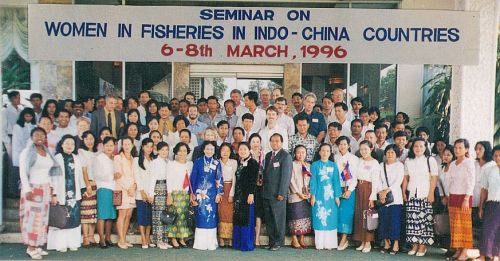 He went to work in what was then called Kampuchea whose countryside was still strewn with unexploded bombs and land mines. He was young and probably cared little if he stepped on one. He promoted to a country, reeling from genocide, aquaculture development. It was for the small and subsistence farm households, which at that time all of them were. He was employed by the Netherlands-based NGO, Partnership for the Development of Kampuchea – PADEK. Funded by charity, he did much to make the P in PADEK — real and working.  He trained young technicians and researchers, many of whom were recovering from the trauma of losing relatives, and marshaled them into a youthful, enthusiastic and skilled cadre for rural aquaculture development. Some of them have taken up responsible posts as researchers and managers in Cambodian Fisheries and the Mekong River Commission.

From Cambodia he moved to Bangladesh where he infused CARE’s technical programme with the social dimension of women’s welfare and their contribution to rural progress. I worked with him in a few more women-in-fisheries development conferences, the last one in the Asian Fisheries and Aquaculture Forum in Shanghai in April 2011. The last occasion in which I was in the same panel of resource speakers and discussants with him was the Global Aquaculture Alliance forum in Bangkok in November 2012. It was on a theme other than women in fisheries (“assurance of decent employment for workers in aquaculture farms and processing plants”) but he was just as passionate in his advocacy. For in the farms and factories, women provide much of the work.  And most important of all — as he depicted in a striking poster of a Parvati-like mother that he helped design for CARE Bangladesh — in the home. For he was first and foremost a good husband and father.