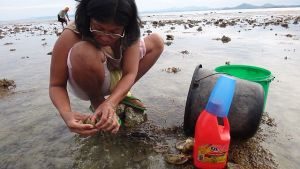 Danika Kleiber and her co-authors have made a welcome contribution to the information on total fisheries harvest and the often un-recorded harvests of women and men, especially by reef gleaning. Working with local communities who live and work on the reefs on Danajon Bank, Bohol Province Central Philippines,  and 4 Cebuano-speaking research assistants (see photo), they have estimated  total catches and participation in all types of fishing including reef gleaning, an important local activity.  Their paper is: “Improving fisheries estimates by including women’s catch in the Central Philippines” (Danika Kleiber, Leila M Harris, Amanda C J Vincent in the Canadian Journal of Fisheries and Aquatic Sciences).

In the paper, they report on how the number of fishers, the percentage of women fishers, the total catch and its composition changes depending on the definition of fishing used. Including gleaning as fishing had a particularly strong effect. They distinguish the “cultural” and “livelihood” definitions of fishing. In the cultural definition, fishing tends to be a more male focused activity and does not include gleaning, even though some men also glean. In the livelihood definition, fishing and gleaning, especially of women, may not feature because it is secondary. Thus, using the cultural definition of fishing yielded only 20% of the fishers were women, and using the livelihood definition only 16%. If fishing is defined to include all the activities that harvest marine life, then 42% of fishers are women. In the communities studied, men outnumbered women who tended to have higher out-migration.

Abstract: Small-scale fisheries catch and effort estimates are often built on incomplete data because they overlook the fishing of minority or marginalized groups. Women do participate in small-scale fisheries, and often in ways distinct from men’s fishing. Hence, the inclusion of women’s fishing is necessary to understanding the diversity and totality of human fishing efforts. This case study examines how the inclusion of women’s fishing alters the enumeration of fishers, and estimations of catch weight, fishing effort, and targeted organisms in twelve communities in the Central Philippines. Women were 42% of all fishers, and contributed approximately one quarter of the fishing effort and catch weight. Narrower definitions of fishing that excluded gleaning (gathering of benthic macro invertebrates in intertidal areas) and part-time fishing masked the participation and contribution of most women fishers. In this case study it is clear that overlooking women, part-time, or gleaning fishers led to the underestimation of fishing effort and catch weight. Overlooking gleaning had also led to underestimation of shells and other benthic macro invertebrates in fishing catches.

See Danika’s post in 2011 on some of her data collecting techniques: http://www.projectseahorse.org/blog/2011/8/30/beautiful-beautiful-data