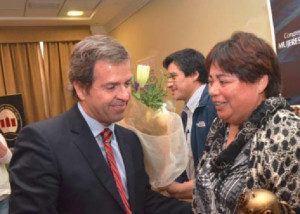 There were 150 women members from CONAPACH at the International Congress
of Women in Artisanal Fisheries held in Valparaiso, Chile from 5-7 June 2013. Photo: Yemaya July 2013, p. 6

In the July 2013 edition of Yemaya, the gender and fisheries newsletter of the International Collective in Support of Small-scale Fishworkers (ICSF), the Editor, Nilanjana Biswas, pointed out that women fisheries activists were frequently afraid of being branded “feminists” because of the pejorative connotations of the term. And yes, she wrote,  “feminism is the ‘radical notion that women are people’, and so, have equal rights“. [See also our glossary explanation of the origins and use of the term feminism – http://genderaquafish.org/resources-3/glossary-of-terms/].

This observation about the resistance to being branded a feminist arose partly as an overall reaction to the challenges facing women in small-scale (and other) fisheries, but also directly from the Yemaya report, by Natalia Tavares de Azevedo and Naina Pierri, on the June 2013 International Congress on Women in Artisanal Fisheries. After this South and Central American event, Natalia and Naina wrote:

A striking point in the discussion was that the fisherwomen from Chile were keen to assert that they are not feminists, suggesting thus that feminism was something negative with which they do not want to be identified. This casting of feminism as reverse sexism, as an idea of “paying back with the same coin” or as putting women in a position of superiority and domination over men is, in our opinion, an unfortunate and common misconception, stemming from the lack of awareness of what feminism really is—the struggle for equal rights and for the end of unequal power relations between the sexes.

To read this and other articles in the July 2013 Yemaya, click here

An early fisheries (aquaculture) gender study that was not afraid to mention the word “feminist” was the Institute for Development Studies paper by Elizabeth Harrisson (1995), called “Fish and Feminists“, that explored the rather early forays into trying to address feminist ideals in fisheries projects. Here is the Summary of that report, which is an essential one to read if you are on the road to discovery in what gender in aquaculture and fisheries entails.

Summary:  Despite apparent acceptance of gender analysis within development organisations, this is still only rarely translated into gender-sensitive practice. The language of gender and development is adopted, but is accompanied by a subtle shift into ‘projects for women’. The article considers the problem through a case study of a programme in one international development organisation – the Food and Agriculture Organisation (FAO). The programme promotes small-scale fish farming in southern Africa, and gender issues have gained a high profile in its stated aims. The case study traces the articulation of gender issues from headquarters to a pilot project in Luapula Province, Zambia.