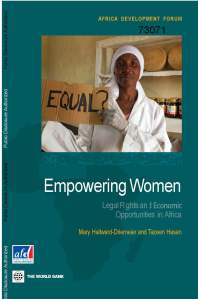 A new publication from the World Bank’s Africa Development Forum takes a hard look at gender inequality in legal rights and relates this to women’s chances of succeeding in the economic sphere. Particularly, this book looks at family inheritance and land laws, which underlie the (gender-blind) business laws. It examines the laws in all 47 Sub-Saharan countries.

Although the publication does not specifically address aquaculture and fisheries, the legal matters have very similar application to those for agriculture which the book does address, especially in the case of aquaculture.

Preface: This book looks at the effect of legal and economic rights on women’s economic opportunities. It focuses on entrepreneurship because women in Africa are active entrepreneurs, and the links between property rights and the ability to enter contracts in one’s own name affect entrepreneurial activities.
The laws that are the focus of this book are not business laws and regulations,
which are generally gender blind and presuppose that individuals can own property or enter into contracts. Instead, the book examines family,  inheritance, and land laws, which oft en restrict these rights in ways that hurt women. This book surveys constitutions and statutes in all 47 countries in Sub-Saharan Africa to document where gender gaps in these laws impinge on women’s legal capacity, property rights, or both. Th e results are introduced in a new database: the Women’s Legal and Economic Empowerment Database for Africa (Women–LEED–Africa).

The book also looks at some labor law issues, such as restrictions on the types of industries or hours of work in which women may engage and provisions for equal pay for work of equal value. These laws affect women as employees and
influence the attractiveness of wage employment versus entrepreneurship. They were also selected because they affect the choice of enterprise women may run.

The equal pay for work of equal value provisions are also of interest as an indicator of the recognition of women’s broader economic rights. This book provides a series of indicators that show whether a country does or does not provide particular legal provisions. Several points are worth emphasizing in interpreting these indicators. First, the indicators are binary; there is no attempt to differentiate between small and large gender gaps. Second, the indicators are not used to generate an index or otherwise aggregate the indicators; no weights are given to differentiate the relative importance of different sets of laws. Third, the indicators reflect whether certain legal provisions are recognized in a country or not; because the link between the indicator and gender gaps is not always straightforward, care must be taken in making value judgments. Although some indicators reveal that women are treated equally or identify gender differences in treatment, others do not. For example, the database includes indicators on whether customary or religious law is recognized as a formal source of law. Although recognition of these sources of law can have implications for women’s rights (as discussed in chapter 3), it does not necessarily imply that women’s rights are stronger or weaker. Conversely, the inclusion of some protections for women’s rights may reflect not the strong standing of women but rather the fact that gender equality is not seen as axiomatic and needs to be explicitly stated.

Chapter 1 argues for the importance of broadening the set of laws that need
to be examined in order to determine how law affects women’s economic opportunities. Chapters 2 and 3 focus on formal rights and how they have been upheld in court decisions. Chapter 4 examines the gap between laws on the books and practice on the ground. Chapter 5 looks at how both the substance of law and women’s access to justice issues can be improved to expand women’s ability to pursue economic opportunities.