Angela Lentisco reports on the Centre for Maritime Research (MARE) Conference in Amsterdam (26 to 28th June 2013),  panel sessions led by Easkey Britton on Engaging Gender for Sustainable Fisheries Livelihoods and Improved Social Wellbeing: Perspectives from the Global North and South. 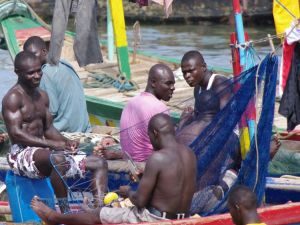 “The panel presentations (which you can download from the links on this website) were food for thought, covering aspects related to gender and fisheries/marine/coastal environment, and the improvements that need to be done in the value chain, particularly on markets, identifying possible negative consequences, and ways to empower women with special attention given to women’s own perceptions of their occupational activity and their sense of self-worth. The role that women play in social cohesion and community wellbeing appeared several times during the panel, but so did the concern on women’s overburden, and the possibility of gender based violence as an unfortunate consequence of changes in gender roles. This issue was also explored during the presentation on maritime masculinities, and the expressed need to focus some of the research on men, due to the important role they also must play in attaining equitable societies. I presented the future directions of the Genderaquafish network and discussed in more detail potential joint initiatives between the Too Big to Ignore Project and the Gender Network during coffee/lunch breaks.”

Angela Lentisco. Getting Gender on the Fisheries and Aquaculture and Fisheries Agenda in Asia and the Pacific: 20 Years of Asian Fisheries Society Experience

Edward Allison. A ‘provocation’ on maritime masculinities – and why they matter for marine resource management

NC Britton. The hidden costs of gender-based violence in an Irish fishing community: a new pathway to policy and structural change