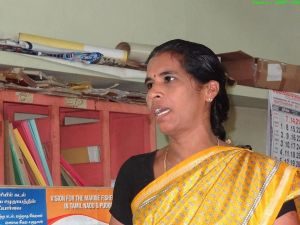 Ms Rani, wife of a fisher from Toothoor area in Kanniyakumari district of Tamil Nadu, India. Her husband, besides catching tuna, also catches sharks. Ms Rani was speaking in a stakeholder meeting convened by the BOBP-IGO to discuss the shark fisheries management plan. Photo: BOBP-IGO

Most marine and fisheries development projects are gender blind, even though, in recent years, they generally pay much more attention to reaching out to fishing communities.  What does a major, multi-country project do when it wants to get serious on overcoming its gender-blindness? For sure, the project partners face a steep learning curve, but the FAO-managed Bay of Bengal Large Marine Ecosystem (BOBLME) project has taken the plunge. In 2012, it commissioned a major study by Cecile Brugere to help them work out where they stood and what to do. BOBLME has now published Dr Brugere’s report  – Mainstreaming Gender in the BOBLME Project: gender audit and recommended actions for mainstreaming a gender perspective – and it is a very useful guide with wider relevance than just BOBLME.  It is a veritable “how to” and literature review from which  new and even experienced practitioners can learn a lot. Also significant is that this is the first of the Global Environment Facility (GEF) supported Large Marine Ecosystem projects to undertake a thorough gender audit.

The Regional Coordinator of the Bay of Bengal Large Marine Ecosystem Project (BOBLME), Dr Chris O’Brien told Genderaquafish.org that, ” even though BOBLME countries faced many challenges in tackling gender inequalities, now there is some clarity and guidance on what needs to be done. Moreover, the countries  are supportive of addressing gender considerations in a concerted way in the next five year phase of the Project.” 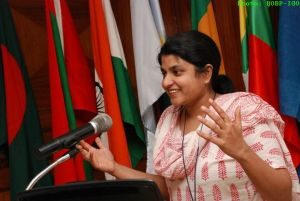 Ms Tanvi Vaidyanathan, Consultant working with the BOBP-IGO in the Gulf of Mannar Project. In the picture, Ms Tanvi is delivering a lecture in the Regional CCRF Training programme. Photo: BOBP-IGO.

This paper was prepared to support the mainstreaming of a gender perspective in the BOBLME Project and SAP. The gender audit of international and regional instruments the eight BOBLME partner countries are signatories, as well as national development and fisheries policies highlighted uneven progress in tackling gender inequalities and accounting of gender issues, overall denoting a cultural and institutional environment that may not be at all times conducive of gender mainstreaming initiatives. While the majority of the BOBLME Project documents audited were found to be gender-blind based on their sole contents, this was attributed to a lack of awareness rather than an intended oversight. Despite the relative advancement of the project, entry points to mainstream gender in the SAP were identified through:

In addition to these, key recommendations for future action by the BOBLME partner countries include: