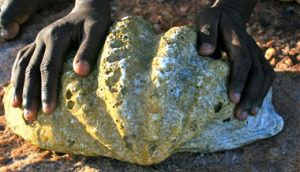 In northern Australia, Lisa Petheram, Ann Fleming, Natasha Stacey and Anne Perry reported the results of a first study in Wurruwi community on South Goulburn Island (Northern Territory, Australia) people’s, especially women’s, perceptions and preferences on marine resource use and climate change. The report describes the local communitys’ modern history up to the 2011 establishment of the local Aboriginal Development Corporation (‘Yagbani’) of community representatives. The report gives a good review of the role of natural resources for food (“bushfoods”), cultural identity and the local economy, highlighting just how neglected this knowledge is in current economic, health and social policies and programs. Planning and adjusting to the impacts of emerging climate changes are not yet factored into local people’s lives, and options such as aquaculture are a distant yet distinct possibility. The women prefer less technologically complex forms of aquaculture and would like to see

Donwload the report at: https://nccarf.edu.au/indigenous-womens-preferences-climate-change-adaptation-and-aquaculture-development-build/

Research was carried out on South Goulburn Island, Northern Territory, to improve understandings of local, Indigenous people’s dependency on marine resources, and of their perspectives on climate change, and aquaculture as a means towards adapting to climate change. Workshops and interviews were carried out mostly with women, but also some men with an emphasis on the use of participatory and visual techniques to encourage discussion of the future.
Customary knowledge, particularly of the marine environment, appeared to be an integral part of people’s construction of identity. The collection of ‘bushfoods’ had importance in improving and maintaining people’s wellbeing, well beyond nutritional benefits. Participant discussions indicated very limited understanding of western concepts of climate change. Many reported noticing patterns of environmental change in their ‘country’. These observations, combined with movement away from certain customary practices and loss of local knowledge, caused worry to many participants, particularly older generations.

Participants demonstrated a worldview strongly dominated by social and cultural links to the past and present but with weaker linkages to western concepts of ‘the future’. Thus, discussions around planning for adaptation did not fit easily into conceptualisation by many participants, especially when focused on climate change.People’s preferences to adaptation usually concerned building general community capacity, drawing from customary knowledge, being more involved in government decision-making and learning more about scientific knowledge. Enabling greater collection of bush foods and associated interaction with the landscape was also considered key to improving community independence, resilience and wellbeing.

Participants showed strong interest in aquaculture as an option to help diversify food sources and minimise reliance on store purchased foods and provide income for the community – especially under future climate uncertainty. Many older participants saw aquaculture as a way to encourage greater involvement of younger generations in sea management and consequently building autonomy and skills. People preferred low maintenance aquaculture, carried out in a way respectful to culture, directed by community, with support from scientists. Many participants indicated they would feel strong pride if a community enterprise based on customary knowledge could be developed. There was considerable faith in the local corporation in managing decisions relating to aquaculture and adaptation. However, people had limited understanding of aquaculture practices, technology and logistics and capacity involved in establishing and maintaining enterprises. And although people desired greater employment and skills, conventional employment was not a high aspiration except where work was closely related to the natural environment.

Implementing programs of ‘aquaculture for adaptation’ will require improved communication and learning among all stakeholders. This involves developing longterm relationships built on trust, awareness of different worldviews on adaptation, planning, resource management and development. Supporting aquaculture development on Goulburn Island may help adaptation by expanding livelihood options and enhancing collection and local consumption of bushfoods. However, logistics of implementation will be complicated, and will need to be part of a wider set of options. An adaptive management approach that involves community, decision-makers and researchers planning and testing ideas and developing workable solutions could provide the inclusiveness that local community desire.