The gender gap is now estimated to be, on average, very narrow for education and health outcomes, but large for economic participation and very large for political outcomes. So, while women have happily nearly achieved parity in education and health status, they still experience challenges in the economy and massive inequity in the political sphere. The following figures is from the 2012 Global Gender Gap Report (click here to see the full report, including country rankings). 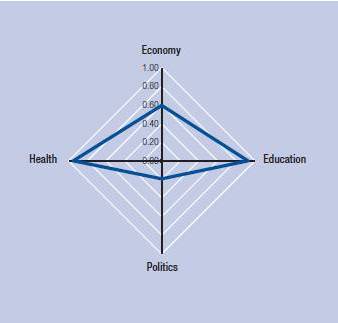 The figure “shows a global snapshot of the gender gap in the four sub-indexes. It shows that the 135 countries covered in the Report, representing over 90% of the world’s population, have closed almost 96% of the gap in health outcomes between women and men and almost 93% of the gap in educational attainment. However, the gap between women and men on economic participation and political empowerment remains wide: only 60% of the economic outcomes gap and only 20% of the political outcomes gap have been closed.”