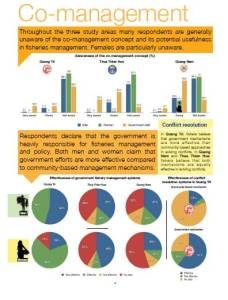 The Spain-FAO Regional Fisheries Livelihoods Programme for South and South East Asia (RFLP) started its work in 2009 by undertaking comprehensive baseline studies in its selected coastal project sites in Cambodia, Indonesia, Philippines, Sri Lanka, Timor-Leste and Vietnam. RFLP published the baseline survey reports in traditional formats. Now, RFLP has turned the detailed reports into a series of infographic reports to give a wider range of readers a faster and more visual way of accessing the wealth of materials they contain.

RFLP is one of the rare fisheries projects to incorporate a gender component (see Angela Lentisco’s overview paper on this from GAF3, plus papers and powerpoints from Nguyen Dang Hao, Rosario Segundia Gaerlan and colleagues, Bandara Dissanayke and Heng Ponley). The interest in the gender dimension is reflected in the reports which each look into the roles of women and men in the local fisheries and their supply chains, and respective roles in decision making, and knowledge of livelihood options.

The RFLP sites for each country are:

All RFLP files are now archived on the FAO site: see http://www.fao.org/fishery/rflp/en