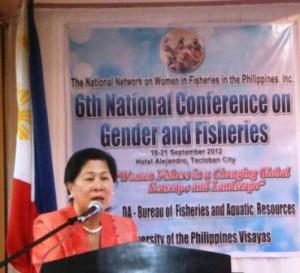 of The National Network on Women in Fisheries in the Philippines, Inc.

The National Network on Women in Fisheries in the Philippines, Inc. held its  6th Biennial National Conference on Gender and Fisheries on September 19-21, 2012  at Hotel Alejandro, Tacloban City in Leyte, an island in Eastern Visayas, Philippines with the theme: “Women Fishers in a Changing Global Seascape and Landscape. 123 participants (111 females and 12 males) from all over the Philippines attended the conference.

For Day 1, Dr. Esmeralda Paz D. Manalang, BFAR IV-A Regional Director delivered the keynote address on behalf of Atty. Asis G. Perez, BFAR Director. Director Asis emphasized that “BFAR, as the primary government agency responsible for the management, development, improvement, and conservation of the country’s fisheries and aquatic resources, has been very active in its gender and development initiatives toward the attainment of sustainable, equitable and gender-just fisheries.” He said that BFAR has developed “gender and development (GAD) checklists for fisheries on CRM; and conducts research, training, and livelihood and field visits of project sites of women’s groups/fisherfolk organizations.” Through these activities, BFAR aims “to conduct participatory resource assessment, consultations with clients and gathering of relevant information/data as inputs to the checklists and ultimately, publication of the checklists and the GAD handbook”, he added. Perez also mentioned the agency’s plan to conduct of socio-economic survey and social research to look into the conditions and contributions of women in the small-scale and artisanal fisheries and fishing communities and gauge the impact of fisheries conservation and resource management on the lives  and livelihood of fishing  communities; to revise the fisherfolk’s registration form to capture socio-economic positions including women’s and men’s roles and interest in the value chain of the sector; to organize fisherfolk women organizations; and to empower women through conduct of training on IEC activities, value formation for both men and women, planning and operation of fishing activities including  the use of environment-friendly and women-friendly fishing gears; etc.; and to pilot women-managed fishing areas. “Experience has shown that women/gender issues are invincible to many in the fisheries sector and advocacy is required to raise the profile of gender. Credible, dedicated and persistent champions are needed. One initial target of action is to bring about policy changes to engender aquaculture and fisheries because, without this, the mandate and platform for gender focus is lacking,” he finished

Philip Jude Acidre, Deputy Director of An Waray Party List also addressed the conference participants and stressed the importance of women in the sector of the fisheries and said, “… if we look closely at the fishery value chain – from the production or actual fishing to the processing stage and finally to the marketing stage, women have played a silent yet important role. While it may be true that majority of actual fishers are men, many of those working in the processing and marketing of fish products are actually women… while the typical fisherman is always stereotyped as male, the fishery industry is not complete without the countless and often unnoticed women workers who work as fish dryers, fish product processors, the fish vendors and fish peddlers. But much of the work that women contribute towards the fishery sector is often ignored and not recognized.“  He also encouraged the participants to take inspiration from the stories of women in fisheries, especially in their capacity to hope in the midst of growing adversity. “ 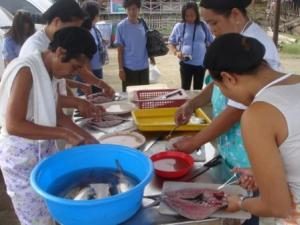 On the third day, participants had an exposure trip organized by WINFISH Eastern Visayas Cluster cruising along the river of San Juanico bridge to a mariculture area as well livelihood activities of Masinop na Kababaihan ng Gintigian, a women’s organization in Samar.