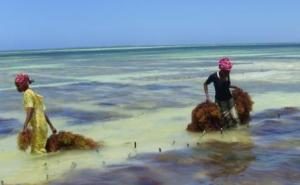 Seaweed farming has grown at much the same rapid rate as other forms of aquaculture in the last twenty years, but seaweeds are produced in far fewer countries than, for example, farmed fish. The Philippines and Tanzania are among the top 8 countries. India is not yet on the list but, on the Coromandel (southeast) Indian coast, the industry commenced in the early 2000s as a platform for women’s empowerment.

Comparative studies on the social and gender dimensions of seaweed farming in Zanzibar (Tanzania), India and Philippines are not available but the three studies below provide insights into different aspects of seaweed farming. Sara Frocklin and colleagues focus on women’s health in the industry in Zanzibar. Ramchandran analyses the property rights and support for women and men from a gender perspective in seaweed and other forms of mariculture in India, finding that women are tending to lose access when an industry’s profitability is proven. Della Grace Bacaltos and colleagues describe community group building efforts and gender roles for small-scale farmers in the Philippines in the Davao.

The research paper is in the journal Aquaculture

Abstract: Seaweed mariculture has been promoted as a development project in tropical countries and Zanzibar, Tanzania, is commonly presented as a successful story. However, the results of the present research provide a nuanced picture of the activity identifying serious health problems among farmers. Semi-structured interviews were conducted with female seaweed farmers (n=140) and non-seaweed farmers (n=140) in Zanzibar to evaluate health and working conditions. In-depth interviews with additional 28 female seaweed farmers were performed to deepen the understanding of the working conditions and related problems. The research was undertaken at seven different locations to cover areas where seaweed is extensively executed during August to September 2009 and May to June 2010. Seaweed farmers considered their health significantly poorer than non-seaweed farmers with fatigue, musculoskeletal pain, hunger, respiratory problems, eye related problems, injuries from hazardous animals and sharp shells in the water and allergies as the most serious issues (pb0.05). Income was further reported below the extreme poverty line. Since seaweed farming affects thousands of households in the tropics these results should encourage changes towards better working conditions and sustainability.

2. India: “A Sea of One’s Own!” A Perspective on Gendered Political Ecology in Indian Mariculture 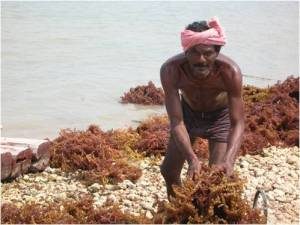 Abstract: In India, mariculture is a sunrise enterprise. Technologies that have attracted the imagination of coastal stakeholders include mussel farming, seaweed farming and open sea cage culture. Mussel (Perna viridis) farming technology has diffused along the Malabar coast (southwest India), and seaweed (Kappaphycus alverezii) farming prevails along the Coromandel coast (southeast India), after it found a niche in the Gulf of Mannar. Having proven their potential as empowerment platforms for coastal women, the theatres where these technologies were adopted raised a number of issues in the realm of a gendered political ecology. The aim of this paper is not only to diagnose these issues but juxtapose them with some of the epistemological concerns being brought by “gender lens” scholarship, especially in the neo-liberal context of global fisheries. A paradox brought out by the present study is the ambivalence of the State in manifesting itself as a positive “bargaining” force in the intra-household domestic space (by providing State-sponsored platforms through the Self Help Groups) while leaving the “common access resource” space, from which these platforms gain sustenance, less amenable to its democratic ideals.

3. Gender Roles in the Seaweed Industry Cluster of Southern Philippines: The DICCEP Experience 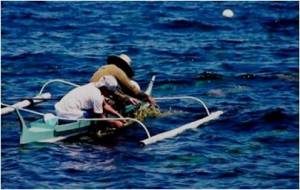 Abstract: Recognising the long value chain of seaweed production, a seaweed industry cluster was developed to enhance seaweed production in Davao, southern Philippines. The seaweed industry cluster was an inter-agency, multi-sectoral initiative to develop a road map for the seaweed industry and its stakeholders in Davao Region. This was designed to increase the income of fisherfolk, improve the regional contribution of the industry and to sustain productivity and competitiveness. Based on the industry cluster approach, a capability building project was implemented through the Davao Industry Cluster Capacity Enhancement Project (DICCEP). After training on the industry cluster approach, three pilot projects were implemented. DICCEP: (1) established seaweed farms for the benefit of farmers, (2) created a directory of seaweed farmers and traders, and (3) developed a database on seaweed production. It also trained 95 farmers and housewives on seaweed value adding and entrepreneurship. The project helped farmers to generate income, and processors to develop new value-added seaweed products. Throughout, DICCEP was sensitive to the gender breakdown among participants in the Cluster. Although men took the main leadership roles, women were active in production and, particularly, post-harvest processing. Men were also active in post-harvest processing and their skills should not be overlooked.