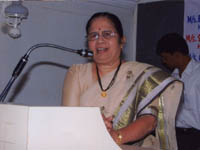 Prof Vijaykhader has a strong record of contributions to women in fisheries through food technology research and education in India. Her contributions have been recognized recently. She was appointed by the Government of India National Mission on Education and the Ministry of Human Resources Development as the subject coordinator for ICT enabled Higher Education at National level on production of course-ware e-Content for postgraduate subjects especially for Food Technology by.

She will also receive the 3rd Dr.Rajammal P.Devdas Memorial Award for her out standing scientific contributions in the area of Nutritional Sciences. She will deliver the Memorial Award Lecture during the 44th Annual National Conference of Nutrition Society of India (NSI) at Titupathi, Nov.16-17,2012.

We congratulate Prof Vijaykhader for her achievements and below highlight some of her publications and awards that are relevant to women in fisheries.

Abstract: In India, women constitute about 50 per cent of the population and comprise one third of the labour force. Women account for 32.5 per cent of the total work force of 121.63 million (1993-94) and the figure is still increasing day by day. Among the different sectors of the Indian economy where women contribute significantly, fishery sector is an important one. Out of the 5.4 million active fishers in India, 3.8 million (70.37%) are fishermen and 1.6 million (29.63%) are fisherwomen.

Study Methodology: In four Indian States – Andhra Pradesh, Karnataka, Kerala and Tamilnadu – 13 coastal districts were selected based on their relative importance in fisheries in the respective States. From these districts, 28 coastal villages were selected based on their method of fishing-mechanized, motorized, non-mechanized and representation of different fisherwomen stakeholders in the district. A total of 5744 households were covered in all the four States.

Abstract: This study was carried out in the coastal areas of Andhra Pradesh, Karnataka, Kerala and Tamil Nadu. From these states, 13 districts and 28 villages were selected. A total of 5,744 households were covered. Cereal consumption was highest in Andhra Pradesh followed by Kerala, Karnataka and Tamil Nadu. Pulse consumption was high in Kerala when compared to other states. The overall energy intake of the fisherwomen was 1,827 kcal/day; protein intake was 50.6 gm/day; carbohydrate intake was 343 .5 gm/day; and fat intake was 27 gm/day. The mean intake of micronutrients was less than the recommended dietary allowance. The mean body mass index was 21 .3. The nutritional status of the women was: 49% normal; 17 % low normal; 10.5% mildly malnourished; 4% moderately malnourished; and 2.9% severely malnourished. About 11 .5% of the fisherwomen were overweight and 4.6% were obese. A subsample of 915 women was clinically observed: 34 .8% were diagnosed with angular stomatitis; 31 % with cheelosis; 42 .8% with bleeding gums; and 44 .2% with dry skin. Some 72 % of the women were anemic.

An assessment of the socioeconomic status indicated that very few households (15 .4%) maintained livestock for income generation. About 60% of the fisherwomen carried out post-harvest activities to earn income. Food expenditure comprised 60.7% of the earned income contributing to the major share of the spending. Debt servicing was a serious problem faced by 44 .9% of the respondents who had procured loans mostly from non-institutional sources.

This article was published in the Community and Environment section of GAA’s October 2005 Global Aquaculture Advocate magazine. It was written by Dr. Vijaya Khader, dean of home science at Acharya N. G. Ranga Aricultural University, and Dr. N. S. Sudhakara, head of the Department of Fish Processing Technology at the College of Fisheries in India.

Role of Fisherwomen in Coastal Eco-System of Andhra Pradesh, Karnataka, Kerala and Tamilnadu – An Overview. By Vijaya Khader and R. Sathiadhas

Abstract: The contributions of the fisherwomen penetrate every aspect of post-harvest handling, preservation, processing and marketing of seafood products and provide an intergral link between producers and consumers. Increased competition, declining resources and difficult working conditions make their work challenging. Women, who constitute approximately half of India’s population, play vital role in the operation of the fisheries and their continuing growth as a component of the agriculture sector of the economy. The assessment of the socio economic status indicated that very few households (15.41%) maintained livestock for income generation. About 60 per cent of the fisherwomen carried out post-harvest activities to earn income. Food expenditure comprised 60.68% of the earned income contributing to the major share of the spending. Debt servicing was serious problem faced by 44.9% of the respondents who had availed loans mostly from non-institutional sources. Much of India’s national food security rests on the shoulders of its fisherwomen. Affording comprehensive care for these women is correct in principle and a practical necessity if India’s fisheries sector is to be satisfactorily sustained and the fisher women empowered, both socially and economically. This can only be done through education about nutrition, health, sanitation, and child care, and training on current technologies and best practices techniques. Education materials viz., CDs, Flash Cards, Pamphlets, Brochures and Folders on health and hygiene, disaster management and income generation activities developed to create awareness. Two equipments namely Low cost ice Cream Freezer and multipurpose fresh fish vending and display table fabricated, received patents and licensed the technology to an woman entrepreneur. 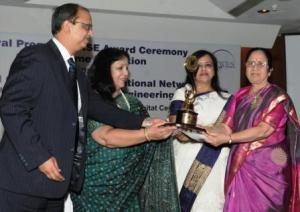 On 12 October 2012: Received the EMINENT WOMEN SCIENTIST AWARD in Delhi, India, at the Regional Conference of the International  Network of Women Engineers and Scientists (INWES).

” The Award was given for her major Research work on SOCIO ECONOMIC EMPOWERMENT OF RURAL, FARM, FISHER AND TRIBAL WOMEN BESIDES IMPROVING HEALTH & NUTRITIONAL STATUS OF VULNERABLE GROUPS OF POPULATION. The Award of Medal & Certificate will be given by Dr. Anura V  Kurpad, President, Nutrition Society of India.”

“Vijaya Khader was instrumental in starting the INTERFACULTY POST GRADUATE PROGRAM IN FOOD TECHNOLOGY IN A.N.G.R.A.U.”