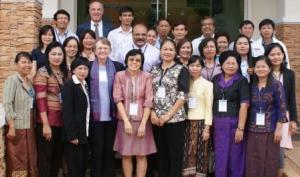 On 21 and 22 June 2012, the world’s longest running gender and fisheries network, the Mekong Network for Gender Promotion in Fisheries Development (NGF) held its 13th annual meeting and field visits to women’s groups for fish processing and aquaculture in the northwest of Thailand . The genesis of the network has been documented in papers by (1) Kathleen Matics in the Asian Women in Fisheries Symposium (1998), (2) M.C. Nandeesha and Elsie Tech at the Global Symposium on Women in Fisheries (2001), (3) Napaporn Sriputinibondh (2004), (4) Hap Navy and Wolf Hartmann (2007), (5) Heng Ponley and Kaing Khim (2011), and also during the 13th NGF meeting (see all references below).

Developed out of workshops in Cambodia in the 1990s, the NGF formed as a federation of government-led national women in fisheries networks in the four lower Mekong River basin countries (Cambodia, Lao PDR, Thailand and Vietnam). The Network is independent, owned by the government fisheries line agencies of MRC member countries and is supported by them and by the Mekong River Commission’s Fisheries Programme. The NGF is a member of the Mekong Technical Advisory Body on Fisheries Management. For the first time, the NGF invited the MRC Fisheries Programme’s national focal points to also attend the NGF meeting in order to further strengthen the links between mainstream fisheries matters and the gender issues. NGF also invited the Asian Fisheries Society, the Network of Aquaculture Centres in Asia and SEAFDEC to take part in the meeting. I attended on behalf of AFS and NACA, along with Dr Ambekar Eknath, DG of NACA and representatives of SEAFDEC.

We were welcomed by Dr Peter Degen, Chief Technical Adviser of the MRC Fisheries Programme and Dr Amonrat (Noi) Sermwatanakul, a Regional NGF coordinator and Thailand Department of Fisheries host . The meeting was followed by Dr Malasri Khumsri, Fisheries Management and Governance Specialist of MRC Fisheries Programme presented  an overview of gender mainstreaming in the MRC and updated us on how the NGF is promoting gender equality in the fisheries sector through the NGF as an informal knowledge network. Achievements included creating better information on gender roles through research, data collection and surveys, strengthening the roles of the national gender focal points and of women’s roles in the generally male-dominated fisheries departments and providing space for cross-scale gender dialogue down to community and local groups. Each of the four national NGF focal points then provided a status report, structured around national structures for promoting gender equality, sex- disaggregated data, activities in 2011-2012 and plans for 2012-2013 and self-assessment of progress. 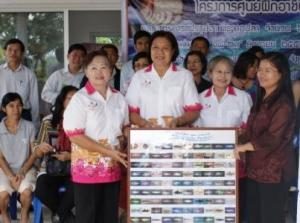 Some of the points that stood out from the four national presentations:

Established in 1997, the Cambodian network has been the longest running and Kaing Khim, the Deputy Director General of Fisheries Administration, reflected on the lessons learned in gender mainstreaming policies and strategies. Since 2008, the gender plans and strategies have been integrated with annual, mid-term (3-5 years) and long term (10 year) plans, as well as with CamCode, the national adaptation of the Code of Conduct for Responsible Fisheries. Good progress has been made, Dr Khim said, through solid policy and strategies and attention from senior leaders, but it is wrong to assume that real change is going to happen suddenly. Due to the sensitivity and complexity of the issues, “unlimited time is needed to disseminate, coordinate, monitor and follow up regularly with agencies and projects/programs.”

Dr Ambekar Eknath, DG of NACA described NACA’s Council commitment to develop gender as a cross-cutting theme in the work programme. I reported in a little more depth on the NACA decision and on the Asian Fisheries Society work to promote gender in aquaculture and fisheries (see: http://www.slideshare.net/Genderaquafish/2012-0622-ngf-mekong-afs-and-naca-13464180). I stressed that we should not expect that the current interest in gender in the fish sector would translate into long term substantive action as the interest had waxed and waned in the recent past. A timeline of gender activities going back to the 1975 Convention on the Elimination of All Forms of Discrimination Against Women (CEDAW) and its impacts in sectoral bodies and in countries showed examples of the ups and downs of interest. To date, we still know too little about what to do to make the sector more gender equitable. The current challenge is to ensure that the renewed interest leads to more substantive action.