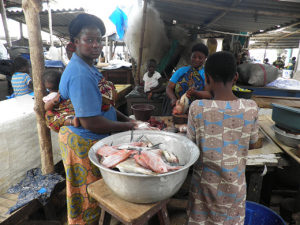 In her 2011 papers, Nilanjana Biswas, an independent researcher from India, argued that research on women and fisheries had shifted, over the decades, from a ‘political economy’ approach to a ‘political ecology’ approach. Along with this, fisheries development assistance and general development assistance has shifted to align efforts with those of countries to become more industry (capital) friendly. She challenges the development assistance community to look beyond the framework of capital. Although not providing a way forward, Dr Biswas raises the most challenging issues facing those concerned with women’s positions, and especially their frequent exploitation in the sector as it has rapidly industrialized.

Two recent papers, one on Ecuador shrimp farming and mangroves and the other on a Tanzanian fishery, illustrate the political ecology approaches. An important paper, from 2004, also has took a feminist political economy approach. In it, Dean Bavington, Brenda Grzetic and Barbara Neis studied the ‘fishing down’ of Labrador and Newfoundland fisheries (see below).

You can find different versions of Dr Biswas’s work in the following places:

A. Biswas, Nilanjana. 2011. Turning the tide: Women’s lives in the fisheries and the assault of capital. Occasional Paper. Chennai, ICSF. 41p.

B. Turning the Tide: Women’s Lives in Fisheries and the Assault of Capital In Economic and Political Weekly:  http://environmentportal.in/files/file/Fisheries.pdf

Abstract: Over the years, research on women in the fisheries moved from a framework of political economy to a framework of political ecology. This meant that analyses shifted away from labour, production relations and surplus value extraction typically grounded in Marxian modes of analysis, in favour of those focused on environmental sustainability, livelihood sustainability and a discourse on poverty. During this period, women’s labour has been mobilised at an unprecedented scale and concentrated in the most exploitative jobs to fuel economic growth in fisheries. Even as industrial fisheries thrive on the labour of poor women, new analyses and new forms of organising are needed to fundamentally challenge this exploitation. Capital cannot be left unfettered to do as it pleases, but must be forced through stringent regulation to heed other considerations apart from profitability alone. Donor aid is, however, driving the non-governmental organisation increasingly towards conciliatory, mediatory roles, incapable of seeking solutions outside the framework of capital.

2. Accumulation by dispossession in coastal Ecuador: Shrimp farming, local resistance and the gender structure of mobilizations

ABSTRACT: Over the last two decades, the global production of farm-raised shrimps has increased at a faster rate than any other aquacultural product, leading to massive socio-ecological damages in the mangrove areas where shrimp farming often takes place. Consequently, an increasing number of conflicts pitting coastal populations against shrimp farmers has been reported although very few conflicts have been studied in detail. This article contributes to fill this research gap by analyzing the causes, development and consequences of one such conflict in the Ecuadorian canton of Muisne (province of Esmeraldas). This conflict is one of the world’s earliest and most important protest movements for the defence of mangroves and against the shrimp industry. Within a political ecology perspective, we connect three key dimensions of the conflict: (1) the socioeconomic metabolism of shrimp farming locally and internationally, (2) the institutions – formal and informal – that regulate the access to mangroves, and (3) the development of the mobilization itself, with special reference to the role of local women. The study is based on six-month fieldwork and combines data from 52 in-depth interviews of a wide range of actors, various documentation, and direct and participant observation. We find that the development of shrimp farming can be understood as a modern case of enclosure movement whereby customary community mangroves are privatized for the building of shrimp ponds. As a result, local mangrove- dependant populations – especially women – mobilized with the support of a grassroots Environmental Justice Organization. The protest was targeted at a form of ecologically unequal exchange where sectors of the global North shift socio-ecological costs onto poor sectors of the producing regions of the global South. In agreement with feminist political ecology, local women were particularly resistant to this process of ‘accumulation by dispossession’. While only some mangroves could be saved or reforested as a result of the movement, women’s mobilization has had the unexpected effect of challenging gender relations in their communities. This research articulates dimensions of a given conflict that are too often considered separately, namely social-metabolic issues, institutional change, and gender issues. This allows a more comprehensive view of a complex power struggle.

3. Income diversification, social capital and their potential role in uptake of marine Payments for Environmental Services schemes: a study from a Tanzanian fishing community

The gender dimension in this paper is that women the study area, Mtwara region, who use hand-held and small scale gear, are less involved in reciprocal fishery dependent networks and so more likely than men to take up PES offers.

Abstract: We analyse the role of risk mitigating strategies upon the willingness to adopt a marine PES scheme in fishing households. More specifically we focus on the role income diversification and social capital can play. We find that income diversification and three social capital variables (trust, group membership and presence within a reciprocal fishing dependency network) emerged as significant predictors of willingness to adopt a proposed marine PES scheme. Results are, however, qualitatively different. Group membership and the presence of alternative income sources increased fisher willingness to participate within the proposed PES scheme. Trust was found to have a larger incremental influence on willingness to participate within those villages located outside of the park boundary. However, ‘presence within a reciprocal fishing dependency network‘ showed a negative correlation with willingness to participate. This reciprocal dependency relationship therefore appears to lock fishers in to their current status quo and dissuade participation in the PES scheme. We offer some explanations of the possible underlying mechanism behind this result. The results presented have valuable policy implications for those PES schemes which hope to target poor households.

4. The Feminist Political Ecology of Fishing Down: Reflections from Newfoundland and Labrador

Concluding para: Often ecological science universalizes the experiences of women and men and promotes a highly simplified view of social reality and political economy that makes human activities appear simple and amenable to managerial control. If biologically sustainable and socially just arrangements in the fishery are to be achieved, we believe that the complex ideas developing in the science of ecology need to be balanced by sufficiently nuanced insights from political ecology and feminist political ecology that present an equally complex picture of social relations. As the case of fishing down in Newfoundland and Labrador fisheries shows, gender, race, and class relations characterize fisheries policies and fisheries science at both ideological and material levels. Women in fishery-dependent communities, including those who fish, have been marginal and invisible, struggling for some degree of influence over policy and the nature and dynamics of human interactions with each other and marine ecosystems. The implications of their exclusion are wide ranging and include gendered social, economic, and health effects associated with fishing down, as well as the loss of insight into creative opportunities for ecosystem recovery and protection.