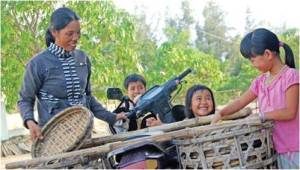 Summary: Responses to climate change tend to focus on scientific and economic solutions rather than addressing the vitally significant human and gender dimensions. For climate change responses to be effective thinking must move beyond these limited approaches to become people-focused, and focus on the challenges and opportunities that climate change presents in the struggle for gender equality.

“Move beyond simple assumptions about women’s vulnerability to highlight women’s agency in adapting to and mitigating climate change.”

The Overview Report offers a comprehensive gendered analysis of climate change which demystifies many of the complexities in this area and suggests recommendations for researchers, NGOSs and donors as well as policymakers at national and international level. The Supporting Resources Collection (SRC) provides summaries of key texts, conceptual papers, tools, case studies and contacts of organisations in this field, whilst a Gender and Development In Brief newsletter contains three articles including two case studies outlining innovative local led solutions.

2. The Gender and Climate Debate: More of the Same or New Pathways of Thinking and Doing?

The Vietnam study addresses women and men in fish and shrimp farming areas.