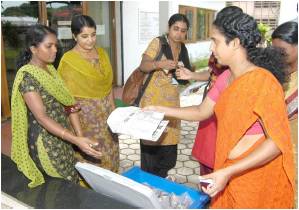 Over the last several months, studies, blogs and news articles have highlighted the challenges of assessing and understanding the various impacts of microfinance. Although not directly addressing fisheries and aquaculture, the findings are relevant to those studying gender in aquaculture and fisheries  as microfinance is often part of a development initiative targeted at women in small scale fisheries and aquaculture. For those with an interest in microfinance, here are some of the recent items and related papers from GAF2 and GAF3.

1. Microfinance’s Sober Reckoning  from the Guardian, and the two recent reports it refers to.

Summary. Roughly one-half of the world’s adults, about 2.5 billion people, have neither a bank account nor access to semiformal financial services such as “microcredit,” the growing practice in developing nations of providing small loans, typically less than US$500, to self-employed people (1). But what if they did? Muhammad Yunus, the 2006 Nobel Peace Prize winner and founder of Bangladesh’s Grameen Bank, a pioneering microcredit institution, argues that this lack of financial access means that the poor, especially poor women, can’t obtain the loans they need to build their businesses and get on a path out of poverty. The idea has taken hold: In 2009, for instance, Grameen Bank served 8 million customers; its average loan balance was just $127. Worldwide, microcredit advocates now claim more than 190 million customers. Proof of concept, however, is not proof of impact. Recent studies have found that some efforts to provide small loans have produced surprisingly weak results, and on page 1278 of this issue, Karlan and Zinman provide more evidence that we need to rethink microcredit. Their findings, from a randomized evaluation of microcredit lending in the Philippines, add to a handful of recent results that suggest that microcredit’s effectiveness has been overstated by studies that selectively focus on success stories.

Abstract: Microcredit institutions spend billions of dollars fighting poverty by making small loans primarily to female entrepreneurs. Proponents argue that microcredit mitigates market failures, spurs micro-enterprise growth, and boosts borrowers’ well-being. We tested these hypotheses with the use of an innovative, replicable experimental design that randomly assigned individual liability microloans (of $225 on average) to 1601 individuals in the Philippines through credit scoring. After 11 to 22 months, we found evidence consistent with unmet demand at the current price (a roughly 60% annualized interest rate): Net borrowing increased in the treatment group relative to controls. However, the number of business activities and employees in the treatment group decreased relative to controls, and subjective well-being declined slightly. We also found little evidence that treatment effects were more pronounced for women. However, we did find that microloans increase ability to cope with risk, strengthen community ties, and increase access to informal credit. Thus, microcredit here may work, but through channels different from those often hypothesized by its proponents.

From the GAF2 Summary: A form of marginalization is when access to a range of desired financial services, including credit and insurance, is poor. Arpita Sharma profiled the social and economic status of 4 types of women fish workers in Dakshinda Kannada district of Karnataka state,India– dry and wet fish retailers and laborers – and their small scale financial services needs. Self Help Groups (SHGs), non-government organizations and national banks were productive, especially in their service focus areas of credit and savings. However, only 40% of women are in SHGs, and more could benefit from forming or joining groups. Most significantly, women expressed strong needs for additional services, especially services designed for micro-enterprise development, insurance, remittances, and microfinance for housing and shelter. While agreeing with the better design of microfinance services to meet women’s need, the Symposium participants also pointed out that very little attention is being given to men’s microfinance needs.

From GAF3 Summary: For poor households, microfinance has become a popular though increasingly questioned solution. It is often targeted at women even if the gender dimensions are rarely studied. Two presentations at GAF3 showed that microfinance, while well regarded by the recipients, usually does not increase their assets and productivity. In 2 districts of Kerala, India, Nikita Gopal reported that government and non-government run microfinance schemes had helped family finances and improved household financial decision-making in low-income families but, since most of the funds had gone into meeting household expenses and not into entrepreneurial opportunities, asset creation had been minimal. In Guimaras, Philippines, Alice J. G. Ferrer found similar results when she studied women and men in fishing and non-fishing households. The decision to seek credit was typically taken jointly by the wife and husband but women then sought the majority of credit, mainly from informal sources. The credit, however, fed consumption rather than production and hence failed to improve productivity or living standards. Both studies stressed the importance of examining all sources of credit and better understanding the need for credit.

[Nikita Gopal and B. Meenakumari Role and impact of microfinance institutions in coastal communities. PPT]