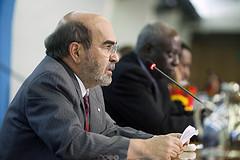 In his statement for election, Mr. Graziano da Silva said, “I am delighted that many governments – particularly in Latin America, Asia and Africa – have told me of their interest in deepening their work with FAO to enhance the status of women.”

The election took place at the 37th FAO Conference. The Conference will also discuss the paper The Vital Role of Women in Agriculture and Rural Development, which followed the FAO Closing the Gender Gap in Agriculture report.